Funeral For A Friend with support from Such Gold and Daytrader
Wednesday 23rd January 2013 – Limelight 2, Belfast

Daytrader are greeted by what can be described as a pretty decent sized crowd considering they are on so early. The majority of their material falls at the heavier end of the spectrum even venturing into post hardcore. This suits  this energetic crowd rightly but on a person level I prefer the more radio friendly, ‘Letter To A Former Lover.’ However as a warm up act they do their job admirably as the Limelight is thumping from a furious bass pumping round the venue and plenty of growled vocals.

Such Gold continue the hardcore rock/punk atmosphere with a torrent of angry lyrics, banging drums and rocking riffs. Lead singer Ben Kotin is one of the most restless front men I have seen. He bounces all over the stage, gesturing at the crowd and encouraging us all to sing or scream along depending on our tastes. They realise that they are here as the support act and relish the opportunity to play as many songs as possible before “getting out of (y)our hair.” Closer ‘Locked Out of the Magic Theatre’ sums up the band perfectly, they are loud, confident and for fans of hardcore with tinge of pop punk you should look no further. 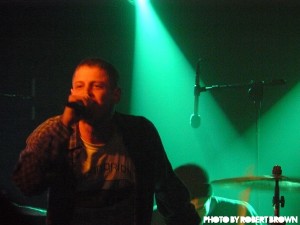 Admittedly the fact I am even covering Funeral For A Friend‘s show tonight is down to some last minute pull outs so I am quite unprepared for what is ahead. My only real knowledge of the band comes from their singles ‘Into Oblivion’ and ‘Walk Away,’ neither of which feature tonight. Opener ‘Red Is the New Black’ is symptomatic of things to come, with heavy post hardcore riffs matched with fairly standard vocals before a crescendo of screaming  takes over.  Despite ten years of relentless touring the band have not lost their energy or passion with each member (with the obvious exception of drummer Pat Lundy) finding it difficult to stay in one spot. The newer material particularly that of the title track from 2013’s Conduit, is edgy and emphatic. Front-man Davies-Kreye has an impressive vocal range and his ability to nail those screaming vocals without damaging his larynx. Recent single ‘The Distance’ is a beast and marks without any doubt that they are back with a bang. Concluding the main set is ‘Alvarez’ where Davies-Kreyes promises “I will be your lullaby” and while it may be one of their less hardcore tracks it is hard to imagine any small children falling to sleep to it. 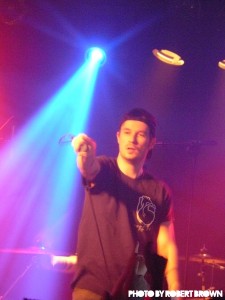 As an encore, the welsh rockers now how to knock it out of the park. ‘Junea’ is  the crowd pleaser that we have all been looking for, as the lads simply watch and admire as the packed Limelight sing “Yet I’m Nothing More Than A Line In Your Book.” The final song of the evening ‘History,’ from their 2005 album, Hours, has a similar effect on this appreciative crowd. One of the things that stood out for me is how appreciative and humble the band are that they have been able to do the thing they love for over 10 years. Indeed although the band have gone through a multitude of changes to their make-up and sound it is good to finally see them content which as tonight has demonstrated bodes well for their future. 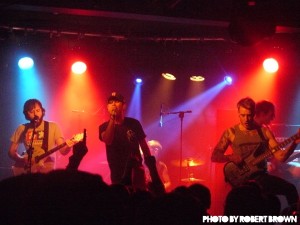