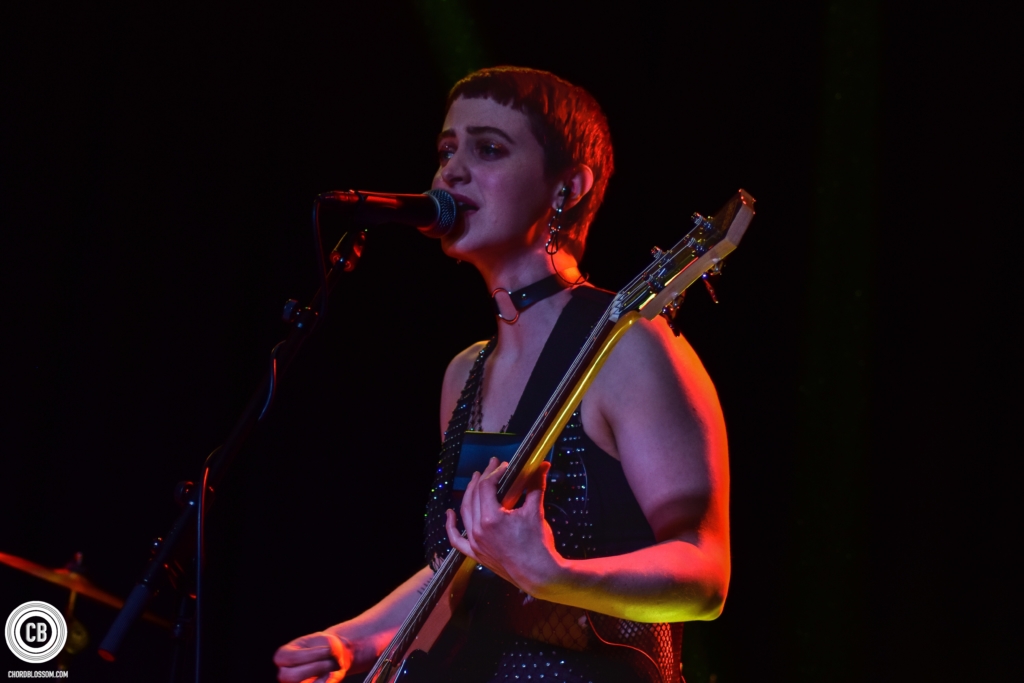 A Berlin based band with plenty of links to Belfast, HAVVK decided our own Oh Yeah Music Centre would be the perfect way to start their Drawn Together tour around the UK. Rather than simply a promotion tour for their debut album (out on 17th May), the premise is a celebration of inclusiveness with line-ups filled with female, non-binary and trans artists. Working with local promoter Drone Mansions, last Thursday’s Belfast date was no different.

With doors barely open, and bright evening sun still shining onto the assembled smokers outside the Oh Yeah’s distinct entranceway, our first band of the night were taking the stage. Molto Vivo‘s set tonight is their first of two, with the band hightailling their way to Drogheda and a live final for a place at Vantastival as soon as they finished here. Spoiler alert, they won.

The three-piece blast their way through sharp riffs for an appreciative if sparse early crowd. Guitarist Matthew Bell leaps energetically around the stage in his socks to the sound of the band’s own busy rock music, with rhytmn held down by Rae Sofley on bass and a typically shirtless Jordan Dickson on drums. They finish with ‘Coffee and Cigarettes’ as Bell finds his way off stage and into the crowd. Shout outs to the other bands, false endings and big energy combine to bring their set to a close.

Following Molto Vivo are another three-piece in Gender Chores. With little time or pleasantries, the band’s shock to the system is opener ‘Fuck the Patriarchy’. No words wasted in the most punk song of the night, a quick explosion of anger that barely lasts a minute and features only the three words in the track’s title. Feminist punk anger in the music and lyrics, warm and friendly in their stage chat, Gender Chores’ performance fits in a cover of Jen Chloer’s ‘Strong Woman’, a new song on Samantha McCann’s own privilege and ends on ‘Territory’, a song about body autonomy. dedicated tonight to Arlene Foster.

The last of our three supports is Strange New Places, an ever popular force, and lately very busy presence, in Belfast’s live music scene. Self-professed queer punk, led by Ashley Jones, the five piece make a wonderfully full indie-pop sound. Having very little in the way of releases but garnering a dedicated following from their shows, there’s plenty of popular songs in their repertoire. ‘Trombone’ sits alongside the word twisting ‘Girlfriend’, while this writer’s personal memorable moment will always be the handclaps and shout of “I’m a thirsty bitch”. Strange New Places again prove themselves as a go to fun live act with heart.

Our final act on the night is the band all the way from Berlin, HAVVK (that’s hawk for the uninitiated). While none of their members hail from Northern Ireland (Julie Hough of Galway being the closest), they do have an affinity with Belfast in particular. This tour is building up to their first album ‘Cause & Effect Part 1’, recorded Belfast’s Start Together Studios with long time producer Rocky O’Reilly. The band make this sense of feeling known, with Hough calling Belfast their 2nd, or maybe 4th home.

Having only played the one Belfast show previously, few in the audience will have had the chance to witness HAVVK live but few here tonight will leave without wanting to see them again. A phenomenal. pulsating live band, their huge alt rock sound is delivered with aplomb from the Oh Yeah’s stage. ‘Bird on a Wire’, one of many tonight from that upcoming album is an early contender for their best performance. Its delicate and dreamlike verses give way to punchy guitar and powerhouse vocals from Hough.

There is often a feeling that a band needs to warm up through a tour, but HAVVK are a confident touring act that look ready to ignite from the off. HAVVK show that tonight. ‘Tunnels’, an as yet unreleased track from the album is another to show off Hough’s siren like vocals and Galway bite when the noise levels rise.

A disclaimer that they didn’t write the last song of the night is hardly needed as they wind their way through a ghostlike cover of Kylie Minogue’s ‘Can’t Get You out of my Head’. La la las and whispered vocals melt into reverb as they bring the night to a close. It’s a small crowd throughout but one very much in tune with the inclusive and welcoming atmosphere that HAVVK and Veta Records want to bring out in this tour.