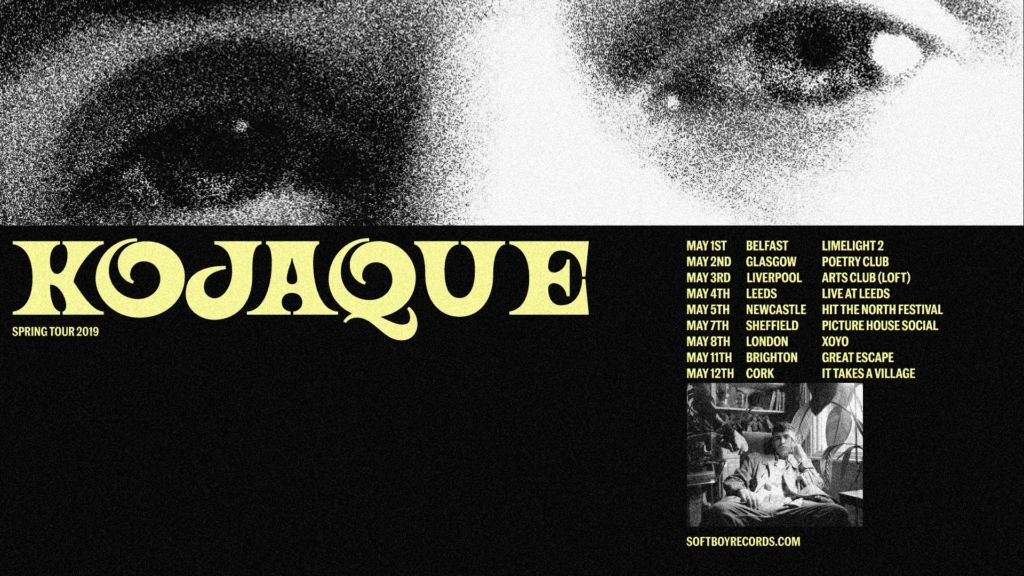 Roughly a year ago in a dusty and peculiar smelling university accommodation, I went to my mate Alex’s room and listened to music. He’d been eager to share a new artist he’d been digging. I soon found myself in a tense disposition, with Alex’s eyes boring into my skull as the track played, waiting to see if we had a new artist we could obsess over and play to death. Not the case on my first listen. It just didn’t connect. But, as some time passed, I decided to give it another chance, on my own, ‘earphones in, world out’ as they say and it did connect, and listen by listen I was becoming obsessed with every part of it. The accent, delivery, topics and artwork, it was totally immersive. That artist was Kojaque and the project was Deli Daydreams.

A year passes. Kojaque is headlining a UK and Ireland wide tour. As I make my way to his show, it is fitting that Alex is with me, as well as my good friends Tom and Gareth.  We convened at spoons, the natural precursor to ANY social occasion in Belfast, and made our way as the sunshine broke for pissing rain on the way to the Limelight.

A pretty intimate setting, with only a little bit of space and the barrier between the stage, on stage were DJ decks draped in a thin sheet of material with the Soft Boy Records logo emblazoned on it. This is the independent collective which brings together an array of Irish talent including Kojaque, Kean Kavanagh and Luka Palm, all who would grace the stage in Belfast.
While I was ordering a pint, Kojaque walked past and positioned himself in the audience to watch his friend. Alex and Gareth took their opportunity to go up and say their piece while trying not to come across insane, which is difficult when a sound which has been living in your earphones from the last few months appears in front of you.

The lights shone a moody blue, and a guitar baring Kean Kavanagh came to the stage backed by a DJ who provided the backing tracks in a set of woozy, rnb soaked songs. In-between tunes, Kavanagh spoke with the audience. He seemed nervous but couldn’t hide his smile when a collection of lads chanted in a very ‘laddish’ manner, “KEANO x10”.  A highlight of the set was Kavanagh’s performance of the fantastically trippy ‘Coca Cola Sky’ which allowed him to show his range as a vocalist. Kavanagh played a few unreleased tracks as well, a standout for me being the penultimate song which had a class refrain of ‘Summer Nights’ which is still ringing around my ears. I particularly enjoyed the closer, in which due to having no time to make the backing track he performed it with just him and the electric guitar, with a layer of percussion of finger snaps thanks to the audience. As he thanked the audience, the finger snaps turned to claps.

A smoke break, Alex ordered ‘2 pints in 1’ (mind blowing concept), and we returned as Kojaque graced the stage, pumping a set that featured quite a few unreleased tracks, as well as most of Deli Daydreams. Kavanagh took to the decks with a beer in hand, as his mate sent the crowd into a frenzy. Early in the set came ‘Last Pint’ and ‘Love and Braggadocio’, the latter’s lyrics “This the emerald isle’s answer to the chronic” couldn’t have felt more poignant to the audience who were fully here for that statement. Kavanagh left the decks, and joined Kojaque on the stage for the ballad, ‘Eviction Notice’ which had me in full sing-along mode. The emotional nature of the song helped to put things into perspective; the moment that tonight was, the first night of their first headline tour, quite a feat.

My favourite, ‘Bubbys Cream’, was next up, the beautiful, personal, lyrics working well in this intimate venue, accompanied by an unreal saxophone solo which closes out the track. For another cut off Deli Daydreams, ‘Politicksis’, Luka Palm was brought out to the stage, the frustrated refrain of “Nothings gonna change now” ringing out repeatedly, feeling particularly striking. Then into ‘Date Night’ which was my highlight. The audience began to bounce along with the chorus of ‘She like the way I feel (How I feel),’ belting out the words as they lost themselves in the moment. On the final song with was a new track with a spoken word quality similar to “White Noise” which excited me for new album. Kojaque reciprocated the love by declaring that it was his “first time in Belfast” and that it had been “fucking amazing”, as well as taking a cute selfie with the crowd.

We left the colourful sounds of Kojaque and Soft Boy Records for a dampened and nocturnal Belfast, with plenty to be discussed and broken down. It was yet another reminder of why Kojaque has the Irish music scene in wonder, and his blueprint is certainly one that many hope to follow.