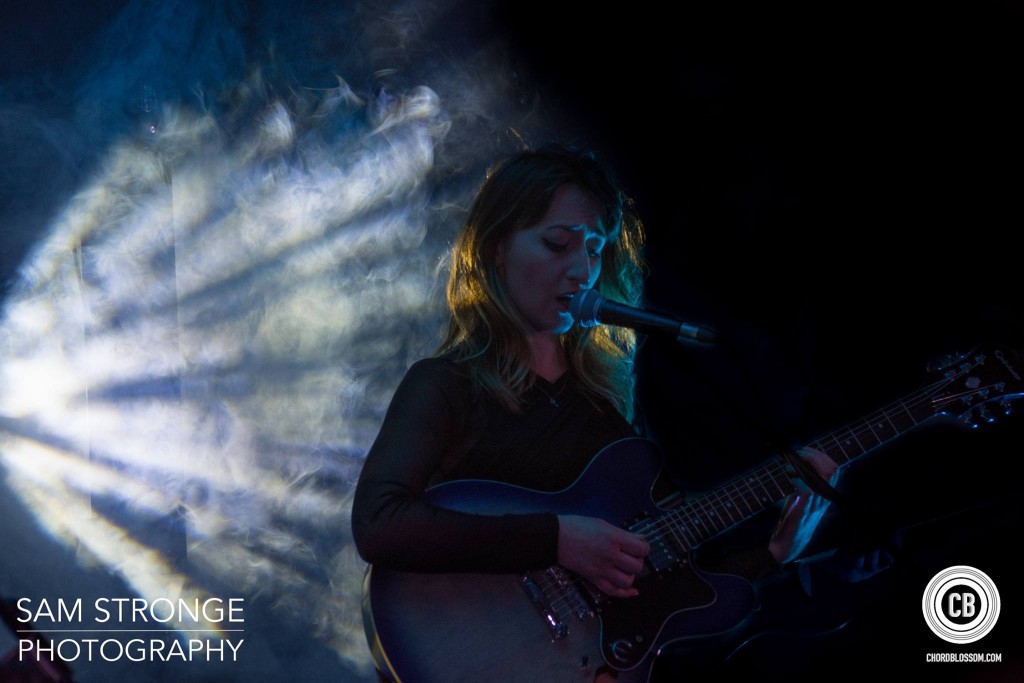 Runaway Go took a few people by surprise early last year when they were reduced to a duo of solely Fiona O’Kane and Dave Jackson. Decisions had to be made whether or not it was worth it to continue, however, having seen the duo perform several times their avid audience would surely agree that the magic is still there. The only thing that was missing was the album, which came in due course after an incredibly successful Pledge Music campaign and, I’m sure, intense late night writing and jam sessions to create the beautiful, heartfelt album “Alive”.

The album launch, promoted by Old Fang, was held in the beautiful Redeemer Central. It has been home to several beautiful moments and launches for the Belfast music scene and is a quirky all ages venue which is becoming more and more popular for bands to invite their audiences to.

Support came from multi-instrumentalist Naomi Hamilton’s solo project Jealous of the Birds. The debut EP Capricorn in March 2015 ensured her the success, and ultimately brought her to the highly anticipated “Alive” launch. Drawing on her suburban folk writer roots, her soft indie melodies are undercut by a strong bass line and sustained chords which create a circular and whole sense to her music.

This is the first I’ve seen Jealous of the Birds with full band to support her, a few songs in she invited her friends Tasha and Hannah onstage for extra vocals, guitar and keys. The added dynamics of a band allowed for the audience to be surrounded by the bedroom studio atmosphere heard in the first EP.

Imitative passages in songs such as ‘Dissolve’ allowed the audience to be entranced by the siren-like quality of the music while songs such as ‘St. Anne’s’ captured the image of the small town city of Belfast. However, no song is more popular than ‘Goji Berry Sunset’. The addictive whistling motif echoed throughout the interlude, acting as an audible reminder of the calming ocean waves of Naomi Hamilton’s music. 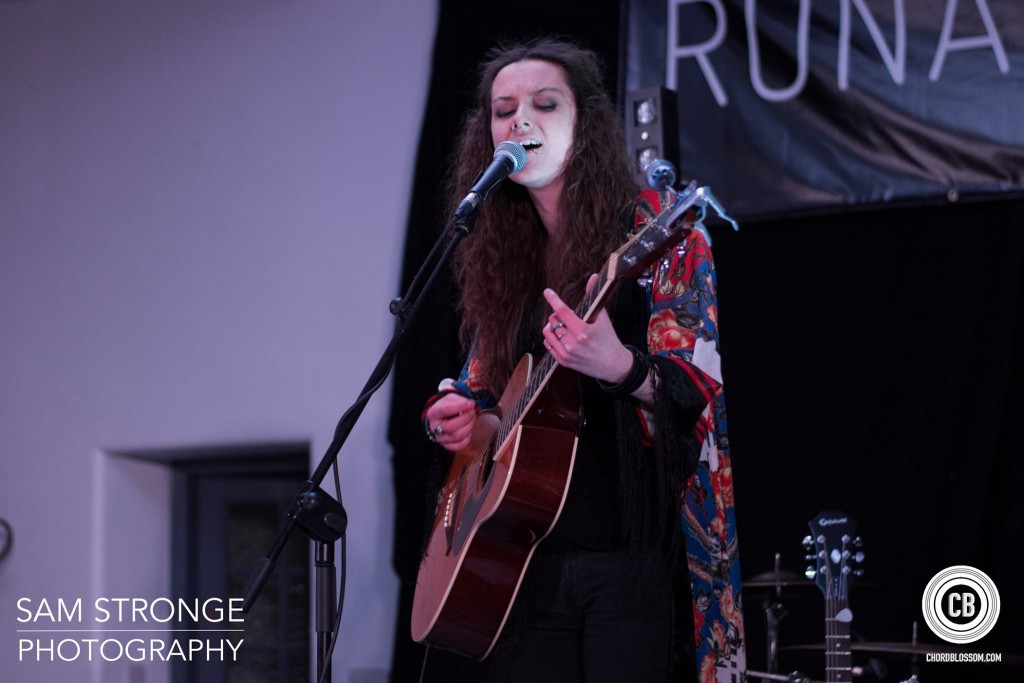 Jealous of the Birds – Photo by Sam Stronge Photography

No album launch is complete without smoke, lights and a highly dramatic musical entrance to help build the buzz in an already rumbling crowd. The first chords shattered the chatter and literally pulled the crowd forward. A light projected from behind the band to create the ethereal haze which the audience already held for the band. And then “it starts”.

Number one and the single for the album, ‘Ashes’ is very likely to be the band’s most popular song and could not be more perfect as an opening. The simplicity of the beginning allows Fiona to strike us with simple perfection and deliver the upbeat indie-pop that Belfast has fallen in love with.

Fiona and Dave work off each others different styles to create a complete live performance. Vocally, Fiona and Dave’s voice’s soar and bounce off each other harmonically and rhythmically as they are both a force to be reckoned with. They create a sound that completely engulfs your senses. Visually, we see Fiona’s complete immersion and dedication to her craft and you feel coaxed in by this love yet, the audience dances with Dave. He never stops smiling and laughing, he always appears as if the music they create and perform live together could not make him happier.

‘Alive’, the namesake for the album is one of the most mature sounds Runaway Go have created, the evolution of their sound is very clear from singles such as ‘Alligators’. The song still features the typical Irish rock drum beat, a simplistic verse and chorus which builds and a rolling chorus of vocals and accompaniment however, it reaches new heights. The song begins higher than any other song they have greeted us with, it is reduced down to something even smaller and more intimate and the final chorus reaches beyond the height of the Redeemer and right on up to St. Anne’s.

‘Crawl’ is the slightly funkier indie-pop song of the album, harking at a Kate Bush or Dido similarity. It couldn’t work better for the band. The whole band is completely in synch, moving together to create something beautiful to watch. They’re clearly group made for the stage, with the inspiring compassion and energy that they carry them through every song. 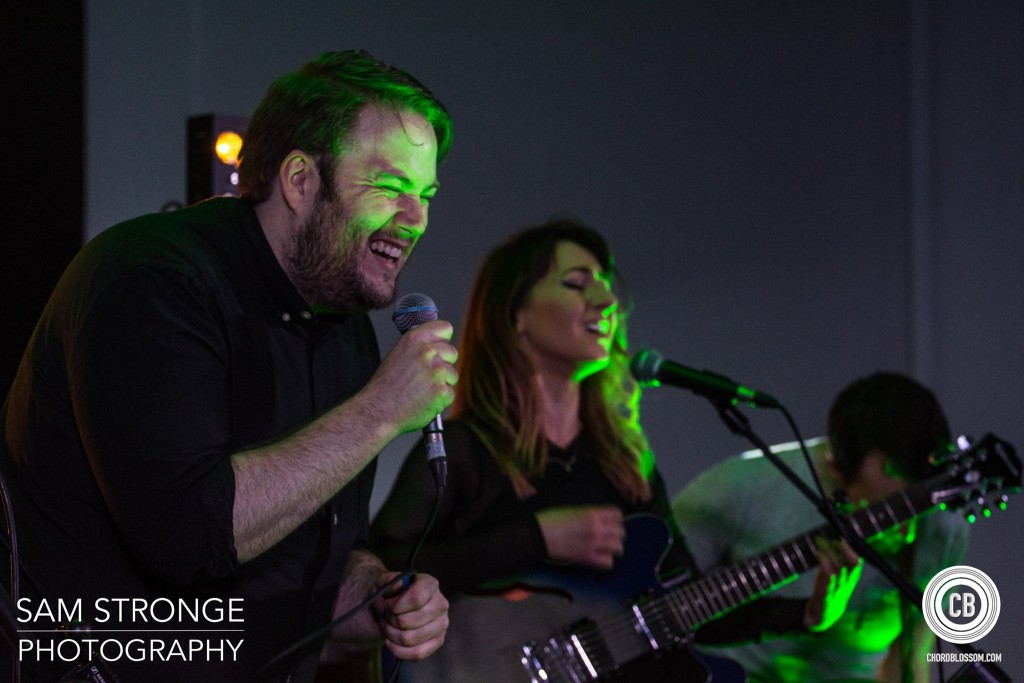 Number six on the album, ‘I’ll Still Love You’, is a truly ethereal experience. A solo song written by Fiona about loving someone and growing old together, she invited harpist Daragh Gillan to accompany her. In amongst the rock and pop ballads, this song is a beautiful stark contrast and acts as a mesmerising and reflective reminder that Fiona O’Kane is an angel. Her voice resonated across the Redeemer and completely enchanted every ear and heart in the room.

Followed by ‘Home to the Clouds’ a personal favourite of Dave’s, an ode to ignoring the haters and following your passions. The song is typical Runaway GO in the melody and drum, heavily influenced by folk music and indie song writing with a modern rock twist and chorus however, this song give’s Dave the opportunity to showcase his soulful voice in the soul and gospel section. ‘Home to the Clouds’ is truly Dave’s time to shine.

Between ‘Delicate Man’ and the encore of ‘Wide Awake’, the band had a chat and decided they did not want to leave and come back for their encore because they were having too much fun. Dave thanked the fans, those who had bought the album, their manager Donard Duffy, Milbank Studios and the band for joining them in the beginning of their new adventure.

Overall, it was a completely beautiful album launch. The venue was so intimate, even for such a large audience, and the music and atmosphere was divine. It was wonderful to see many familiar faces from the Belfast music scene down to support their fellow musicians and it was great to see many younger groups who would not have been able to be there if it had not been an all ages event. However, the most beautiful thing about the evening was the mutual love between incredible musicians, fans, and local music.