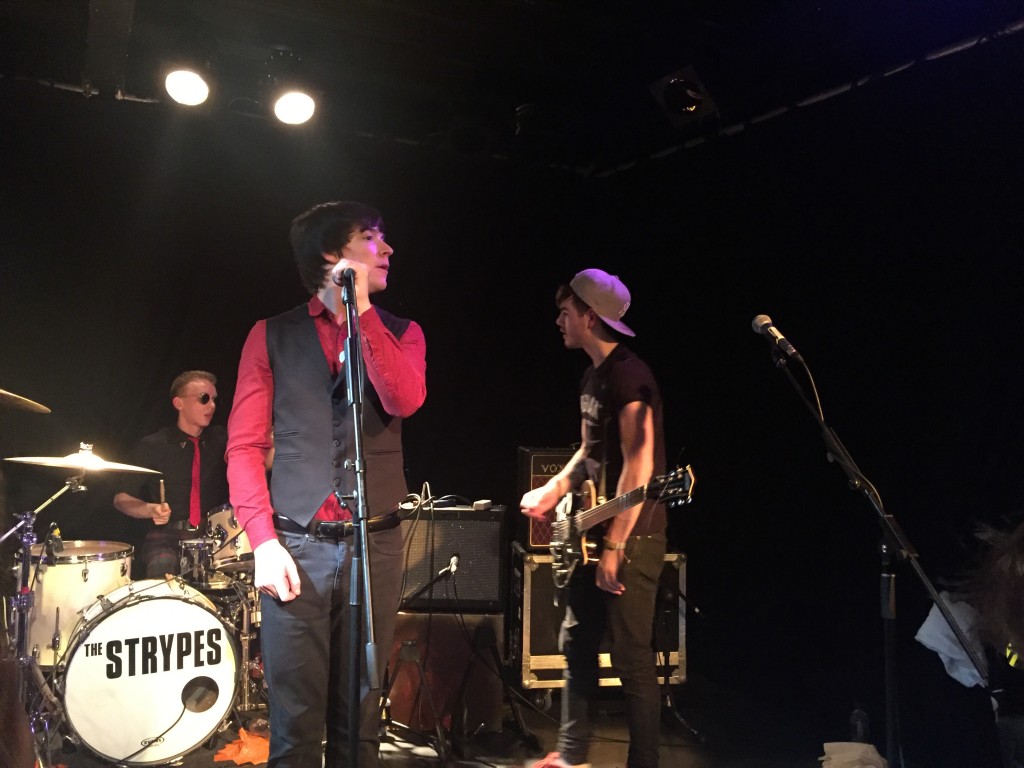 So The Strypes played The Black Box on Friday there (Friday 29th that is). Who are The Strypes I hear your ask? Let me respond to that query with a question of my own. Where have you been?

I first became aware of The Strypes back on their first appearance on RTE’s “The Late Late show” and really the rest, as they say, has been history. Going from strength to strength on the basis of their psuedo-Dr Feelgood Pub Rock sound, combined with their indie sensibilities (as evident on their latest album “Little Victories” which featured a tonal shift away from the somewhat repetitiveness of first album “Snapshot”, and created a unique and much more rounded rock style), refreshing ‘old-is-new’ sheen and rip-roaring live sets, they’ve quickly become one of the most popular and entertaining young acts in Ireland and the UK. I went along on Friday to ascertain if the hype was real or if you could judge this book by its cover. Besides, a sold out show in The Black Box, where tickets were only £14? What have I got to lose?

The Strypes sauntered out of their dressing room through the crowd, as if they had just returned from robbing the county bank, and took the stage to begin their show. There was no banter with the crowd from front man Ross Farelly, who remained all business until the end of the show. Instead it was lead guitarist, Josh McClorey, who took the reins of getting into it with the crowd. Once the show started however, it was all work and no play. Say what you want about these guys, but they give it 90 every song they play and for just a few hours you feel like you’re watching Dr Feelgood in some boozer in London.

Opening with smash hit ‘Hometown Girls’ got the crowd going almost immediately. The fast paced single had the entire crowd surging forward and jiving from side to side within seconds of starting the gig. “Get Into It” provided vicious foot stomping riffs and the typical gig sign along (you know the one, where everyone forgets the words and just hums something that sounds like the correct melody). The group continued from strength to strength with crowd pleasers ‘I Don’t Wanna Know’ and ‘Three Streets & A Village Green’ coming up immediately after. Both coming from the new album, they provided heavier riffs, stronger beats and more songs that you could jump into other people to.

The newer songs persisted for the next few songs, giving the gig a much heavier-yet-indie feel. ‘Cruel Brunette’ sounds like it could be plucked from a ‘Vaccines’ set list with its pop licks and singalong harmonies, while ‘Eighty-Four’ propelled what little resisting members of the audience still at the bar onto the floor with its hammering drum beat and barking vocals which gave it a “Whatever People Say I Am, Thats What I’m Not” feel. ‘Now She’s Gone’ proved to be a great success with what seemed like half of the cathedral quarter joining in for the chorus of “I tell everybody that I’m a shadow of the shadow I USED TO BEEEE”. This was deemed to be the correct time to bring things down a notch with slower number ‘A Good Night’s Sleep and A Cab Fare Home’, which did enough to stall the head banging before someone hurt themselves. Evidence of Hip-hop styled lyric delivery was evident among the verses before the chorus ignited another (but not the last) crowd singalong. Lyrics about nights out and looking for a female companion seem to be a staple of Strypes discography, as becomes evident in this song as crowd favourite ‘Angel Eyes’ wherein the band takes it down another notch again to give the appearance and atmosphere of a Noire t.v. show set, before McClorey tore into ferocious solo that had grown men behind me exclaiming “How?! HOW?!?”

Now they are truly in the driving seat, which fits well with the next song on the set list ‘Still Gonna Drive You Home’. By this point Bassist Peter O’Hanlon began to let loose in his famed stage antics which included jumping around the stage like a man possessed and whipping the nearby crowd (i.e. us) into a howling frenzy. Lyrics that connected with anyone who has had car trouble had us right out of blues appreciation mode and straight back into head banging, just in time for ‘Best Man’. With its speedy vocals and supersonic riffs, it transformed The Black Box into an late 60’s american disco. Fists pumped, hair swung, hips swayed and even the walls were sweating and when McClorey tore into his guitar climax, it would not be hyperbole to say the roof was blown off.

By this point, the hits began to come in quick succession, indicating the main act was coming to its last numbers. The crowd reacted as such, desperate to grab as much ambient energy as possible. Spurred on by O’Hanlon’s antic, Drummer Evan Walsh heroics (God love him, the front man stood in front of him the whole time) and the double act of McClorey and Farelly on the same mic had you linking shoulders with humans you have never met (and most likely never will ever again) as if you were long separated family members. ‘Queen Of The Half Crown’ and ‘You Cant Judge A Book’ provided the R&B flavour for the night, with their erratic licks and driving beat and lyrics, stirring the crowd into a state of near maniacal boogie. Little did we know, this was merely the table setting for three of the bands biggest hits. First comes ‘What A Shame’, the groups song of protest against record executives who insist on appearance over aptitude. A rebellious favourite of fans everywhere with its limerick-quality lyrics and foot slamming crescendo, just in time for the hectic mess that was ‘Mystery Man’. Blues rock riffs abound and slammed listeners as you find your body moving to the beat in ways you were unaware of moments before. And then the harmonica kicks in and all of a sudden the entire crowd had its hands in the air. Eager to capitalise on this vitality, Farelly quickly launched into ‘Scumbag City’ (an act which some young man to my right deemed worthy of worship, given his dropping to the floor on his knees and praising  the band). A harsh and dirty song, absolutely drenched in satire and static feedback had us all howling for more as the group dropped their instruments as if nothing had happened and resumed their simian stroll straight off the stage.

Luckily for us, the encore proved just as thrilling as the main show. First number ‘I Need To Be Your Only’ had the drive and horse power of a 69’ Cadillac, with O’Hanlon’s chunky bass refusing to be denied despite the best attempts of McClorey absolutely ripping on his guitar to what might as well have been the riff from Thin Lizzy’s ‘Emerald’. Following up this gripping performance was the frantic and electrifying hit “Blue Collar Jane”, the bands original hit. Farelly barley had to do any work, as the crowd belted out every word of the song as soon as it was our cue. Riveting riffs and licks penetrated and the constant hammering beat of Walsh kept all eyes glued to this group of young men from start to finish. As a final treat, the band stretched their musical repertoire with a cover of ‘(Your Love Keeps Lifting Me) Higher & Higher’. I must say, I’ve never heard an encore greeted with genuine laughter before the sing along began, but there’s a first for everything I suppose.

Perhaps one of the most enjoyable and exciting gigs I’ve been to in a long time, The Strypes promised to raise hairs and they did not disappoint.