Tom McShane with support fromVerseChorusVerse
Friday 22nd June 2012 – Oh Yeah Centre
Tonight is a very special occasion for Tom McShane as he launches his new album, ‘The Ural Winter’. Having recorded it nearly two years ago in the very same building, it would seem that the album creation process has now come full circle.

Opening for Tom tonight is VerseChorusVerse aka Tony Wright. A man that has already seen a fair amount of success as part of the instrumental kings And So I Watch You From Afar. Tonight he asks us not to be demanding as he is suffering from a cold. Thankfully for us Tony is on fine form and provides us with a charming set. ‘You Can’t Win Back Your Freedom If You’ve Never Been Free At All’ and ‘I Can’t Help’ feature the mournful sounds of a harmonica, giving the evening a distinctly blues/American folk vibe. His set is a mix of faster paced acoustics and more remorseful songs like ‘Spiders’. He finishes with ‘Big Red Van’ with strong vocals that shown no signs of being affected by that pesky cold. 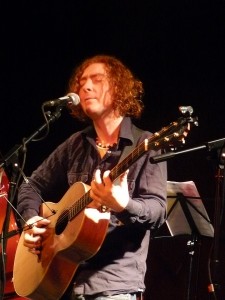 Tom takes to the stage tonight to loud cheers and applause as he finally launches his album ‘The Ural Winter’. Instead of creating a set list and putting the songs in a certain order, Tom and his band just play through the entire album. Opening with ‘The Water’ comparisons can be drawn between the vocal styles of Tom and Death Cab For Cutie’s Ben Gibbard. ‘The Fighter’ is particularly memorable with the repeating chords and drumming leading into some soft vocals before a more upbeat chorus. Next up is the album’s title track ‘The Ural Winter’ which Tom informs us was written about trying to discover who you are, after a meeting with an old friend who told him that she always remembered his love for sausage rolls and winter coats. 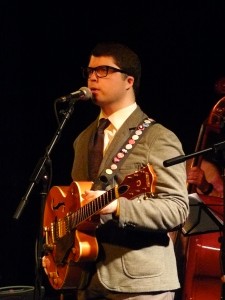 ‘Love is Hard’ is a very sorrowful song led in by swooning violins and features the talented vocals of Ciara O’Neill and shows a very fragile side of Tom’s vocals. Before we know it we are treated to the stand out on the album, ‘One Man Band.’ This is much more of a traditional duet with Ciara and their voices compliment each other perfectly. ‘The Ballad of Morton Candell’ came to life after Tom spotted a fantastic building that had become run down and how the architects parents must have been so proud when it was first built. In a similar sense Tom can be very proud of what he has achieved with this album and hopefully this is the start of bigger things for him. ‘My Nadir’ is filled with soft piano and soaring trumpet solos from Linley Hamilton which gives Tom time to sit in the audience and bask in an impressive nights work. Having been accompanied by a variety of talented musicians for most of the evening, Tom goes solo for the final album track ‘Flowers’, dedicating it to his fiancé. 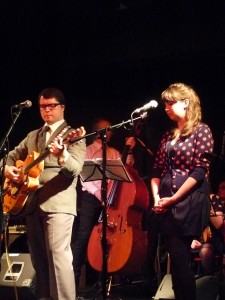 Tom has been plugging away in the Northern Irish music scene for many years now and tonight is proof that if you are talented and keep plugging away eventually you will get the success you deserve. A thoroughly enjoyable performance from Tom and his very talented band, I would advise you to check out his new album you won’t be disappointed.