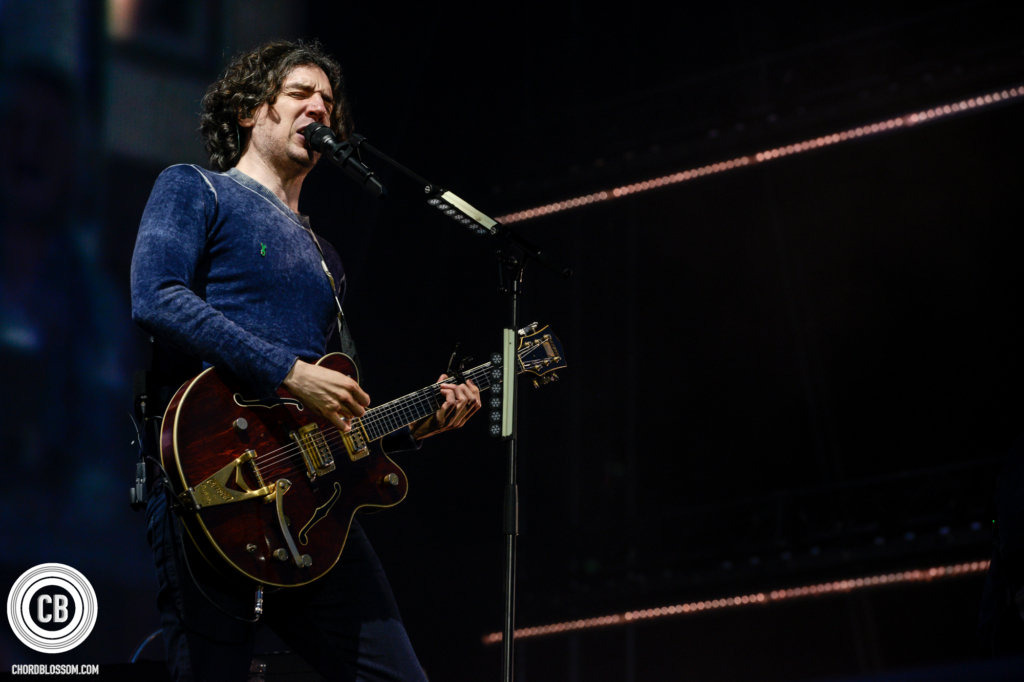 Oddly, I was glad for the rain. ‘Chasing Cars’ wouldn’t have sounded right in the baking sunlight.

Ward Park 3, the latest and possibly final instalment of the festival put on by the Bangor boys. And despite being noticeably absent from the last two, today feels oddly nostalgic for me. Fans clamber through Lanyon Place, blaring music from their speakers, sharing vocal history lessons from the previous times they attended. While it’s a homecoming for Lightbody and co, it feels like a return for us all.

One cramped, unseated train ride later (“all complaints can be addressed to the offices of G. Lightbody” drones the voice over Translinks loudspeaker) and a short walk through Bangor’s bustling, rammed town centre of pubs and restaurants (I don’t think I’ve ever seen that many, or any rather, smiles in Bangor in one day), I arrive at the foot of Ward Park. Guitar feedback hums in the distance.

Snow Patrol make good on a promise that they were not required to make: supporting local music. With an audience numbering in the tens of thousands, the lineup has been populated entirely by Northern Irish acts, spanning two stages. ranging from the North Coast and Derry to Belfast and Downpatrick. I am more than familiar with the first acts to take the stage –

brand new friend take the stage like they’ve been waiting for it their entire life. A usually bouncy set by any standards is elevated by the moment, as the north coast pop-rockers attack their setlist with a zealots gusto. Frontman Taylor Johnson is a full body experience, determined to hit his 10,000 steps by the end of ‘Seatbelts For Airplanes.’

The perfect band to open the days’ proceedings is followed immediately by an essential follow up in Jealous Of The Birds. Led by the twin-pronged attack of skipper Naomi Hamilton and lead guitarist Danny McLelland, their injection of bohemian groove and sunshine rhythms were instrumental in setting the pace for the day. Fresh off a trip down the American Atlantic seaboard, the alt-rock quartet tore through a string of fan favourites, including renditions of ‘Blue Eyes’ and ‘Plastic Skeletons’ which, to my ears, have never sounded better.

The Birds vacate the stage to make way for indie-pop darling SOAK. Still bathing in the positive critical reception of her newest album ‘Grim Town,’ the Derry singer’s return to the spotlight has been well documented. Her four years break has no negative effect on her performing chops, as the pop-laden hooks of lead single ‘Déjà Vu’ (it has the best Irish chorus in years. Discuss.) and aching vocals of ‘Everybody Loves You’ ring out over Ward Park with a crisp, searing burn. With choruses built for the festival circuit, SOAK’s triumphant stomp is enough to cut through the clouds and illicit a single ray of sunshine. The poetry however doesn’t stop there.

I make my way over to the smaller stage for the pop experience of ROE. Her unique mix of alt-indie pop and neo-soul gritty vocals are enough to have any crowd wrapped around her finger, but today she sounds positively huge. Benefited by her stack of amps, ROE is a one-person tour-de-force on stage at Ward Park, with the familiar buzz of goosebumps rumbling down my arm following the booming electronic percussion of ‘Hey Thomas.’ Giddy as a child on Christmas Day in between songs, the Derry native is collected and comfortable, despite her barely repressed nerves. Powered by the intimacy of the stage, the flowing ease of ‘Down Days’ has all the hallmarks of a festival classic, propelled by its starry keys and visceral intonation. The most impressive support set of the day belonged to her.

Set’s rumbled on as the day progressed. Fresh off a mouth scalding Bratwurst, I settle in for the sets of DIY giants Ash and the soulful swoon of Kitt Philippa. Longtime veterans of the scene, Ash rattle of a number of singles from their NI Music Prize nominated album ‘Islands.’ An inspiration to many of the younger bands attending today, the summery punk vibes of ‘Buzzkill’ has Chordblossom deputy editor Aaron Cunningham dancing along almost immediately, while the iconic ‘Girl From Mars’ tugged on sentimental heartstrings I thought long dormant.

In a departure from this, Philippa surges into their tracklist with a delicate purpose. Breath rendering vocals, backing singers and a piano-driven set are a welcome departure from the big noise bands that have dominated the day so far. Gently sweeping, the powerful soulful horizons of new singles ‘You’ and ‘Grace’ get the reverence and respect they deserve.

As the bill increases in prominence, it becomes more and more difficult to traverse Ward Park and, more importantly, the bar queue. It’s become a no-mans land of rabble-rousers and screeching banshees, a territory in which only fools would frequent. Unfortunately, I realise this only after standing in line for fifteen minutes for a watery liquid of some alcoholic content. Realising you are the problem is always a sobering experience and I decide to scrap the whole endeavour. Instead, envoys are sent to the VIP area, laden with fivers, only to return with a bounty of cold brews and vinos. Rumours of a mystery guest intensify (Yes Courtney Cox was there, no she wasn’t the guest), but before we can discuss this a familiar face takes the main stage.

Foy Vance, international man of moustaches, has seemingly been around forever, a feat owed to the instant familiarity of his sound. Deep, gravelly gospel vocals empower his singer-songwriter set, which has become renowned for its live energy (He still plays with his teeth on occasion. this was one of those occasions. it made me considerably happier) and today was no different. A mixture of blue-collar folk rock, soul, swing and blues all contribute to a Springsteen-esque racket that brought the proverbial ceiling down. Few songs are suited for a crowd to sing as one than ‘She Burns,’ a theory which was proved by the 20,000 people at my back.

Fire-brand rockers The Wood Burning Savages, indie Goliath’s Two Door Cinema Club and stalwart JC Stewart are the next acts to grace their respective stages. Recipients of a ‘Best Live Act’ award, the Savages live up to their name, all exhilaration and breakneck energy. A magnetic force when witnessed first hand, frontman Paul Connelly has the makings of the next great Irish frontman, setting the pace with his electrifying demeanour, conducting the crowd and band in equal measure.

Meanwhile, the subdued disposition of Two Door served to belie their colossal sound. One of the last acts of their era, and attendees at the original Ward Park, they proceeded with a show highlighted by colourful visuals and wistful, familiar songs. A mix of old hits and unreleased singles, their striking aesthetic ensured the energy was kept high for their following act. The last to take the stage before the headliners, Stewart straightforward blend of sing-songwriter chops and guitar pop hooks was the perfect warm-up for the main effect. An effortless performer with a real taste for the moment, Stewart was quick to thank the crowd and Snow Patrol, and the crowd was quick to return the favour following performances of ‘Like I Did’ and new single ‘Medicine.’

It’s not long before the big dogs arrive. The crowd has stretched to 35,000, beating the attendee record set by the previous instalment, and stretching the walk time from one end of the park to the other by an eternity (10 minutes). The soaring indie rock of Snow Patrol has taken them all over the world and landed them back home. It couldn’t have been planned better. There is a noticeable buzz in the air. This is different from Tennent’s Vital or Belsonic, with their lineups of big names and little connection. This felt like it meant something. It felt like it mattered

Snow Patrol take to the stage to thunderous applause, with the normally passive Lightbody alive, lost in the moment (despite his cold). Taking time to thanks all the acts individually, the Bangor-born frontman pauses to revel in the moment. The group had played Belfast in recent months, but again this is different. He takes the few seconds to himself, savouring the journey that has led them here, before settling comfortably into their set list of hits. Fan favourites ‘Run’ and ‘Open Your Eyes’ scarcely need performing, as the crowd is happy to take over singing duties. the visual spectacle of their stage setup takes backstage as hit after hit rolls out, a staggering setlist when considered as one.

A special night all round, capped off with a surprise duet of ‘One Love’ with U2 frontman Bono (the actual surprise guest) and a monumental rendition of ‘Chasing Cars,’ it was near impossible for even the cynics in the crowd not to be swept away by the sheer monumental emotion of the night. Snow Patrol’s strength has always been the effortless nature with which they extract genuine attachment with their biggest hits and the timeless nature of their songs. The heartfelt authenticity of their indie-pop transcends generations, but tonight it was elevated still. Snow Patrol’s ultimate triumph can be found in the fact that you felt as much a part of the set as ‘Chasing Cars’ did, and in doing so they have bought you your own little plot in eternity. No one will ever be able to take away the feeling of singing in unison with 35,000 people, and in doing so Snow Patrol have achieved their ultimate victory. Family. A true return for the ages.