2Minutes2Midnight – How Did This Happen 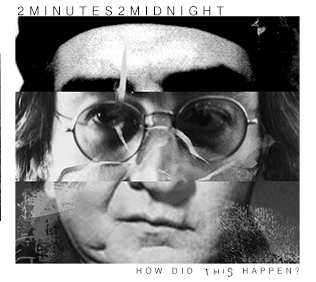 The 4 piece from Dundalk formed in 2010 and follow their award winning debut EP Ask Freud with How Did This Happen. The 6 track EP begins with ‘Bachelor’s Walk’ and from the first drum beats you can see the influence of their inspirations (Oasis, Kasabian, Led Zeppelin and Guns N Roses) lending to their sound. You could easily imagine the likes of Kasabian playing this track until the guitar riffs in the middle where I found myself agreeing with the Hot Press comments that they have guitar solos from the heydays of rock. The next track ‘Carry On’ has a harder sound from the beginning and is reminiscent of early Oasis full of attitude especially in Damien McKenna’s vocals.

‘Lost’ is up next and is the current single (available on iTunes). This is a great up tempo rock love song which put me in mind of All Time Low. Shine On in contrast with its guitar chords and vocals could if you close your eyes bring the Gallagher brothers into your front room. ‘Signs’ returns to the rockier side and it’s hard when listening to stop your foot tapping along. The final track Street Lives just builds on my original impression; these guys are pretty damn awesome. I can’t wait to see them live as I have heard their showmanship is on par with their sound.

To pick a stand out track is difficult but at a push I would say the final track ‘Street Lives’. It’s great to see Irish rock going strong and I have no doubt these guys are here for the long term. Their sound would appeal to many ranging from Oasis to fans of All Time Low.

At the time of going to press it has been announced that Trevor Thompson has recently parted ways with the band due to personal reasons, the band plan to continue as a 3 piece and an announcement of a new tour is imminent.