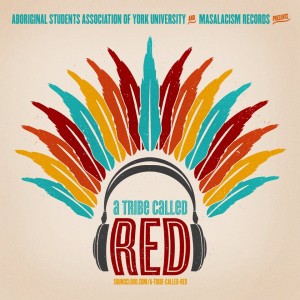 Here we have a rather interesting listen. A medley of hip-hop, dubstep and native American music. A Tribe Called Red (relationship to Quest is unknown) is the brainchild of Canadians’ DJ Shub, DJ NDN and Bear Witness who have created a new musical style known as ‘Powwowstep’. It’s quite the assault on the senses and rather incomparable to anything else.

We are introduced to the eponymous debut with a wall of noise. ‘Electric Pow Wow Drum’ is simply put, A barrage of drums mixed with tribal yells and electronic interference that lets the listener know that they are in for something unconventional. If you are familiar with live dubstep duo ‘Jazzsteppa’ you are in familiar territory, the emphasis on drums and clever use of modulation are on display here but the prominence of the ethnically diverse Pow Wow style really sets it apart.

‘Look At This’ is an absolute foot stomper, with screams and shouts of delirium inter-spliced with electronica reminiscent of Crystal Castles. It is tribal and primal. The energy of this track shows why it is no surprise A Tribe Called Red have gained increasing popularity in Ottowa’s urban club scene. One does get the feeling that the track goes on two minutes longer than it should. The initial fever dissipates into repetition despite the energy expelled.

“Red Skin Girl’ is actually a track by traditional Pow Wow musicians ‘Northern Cree’ which has been given the remix treatment by ATCR. Again the aboriginal roots are at the fore with new styles mixed in. It only takes a few seconds to realise that artists such as M.I.A have taken strong influences in native music such as this. The natural drums work so well with the dubstep and while the vocals are disorientating, one gets the feeling that you have to ignore conventional routines in music to get an understanding of this style. It won’t be for everyone.

‘Woodcarver’ is a chilled memoriam to a police incident in Seattle. It is rather dub intensive with news reports layered over. The screams are unsettling and contradict the chilled atmosphere of the song but again, in a roundabout way it seems to work. This is not a style of music that you relax to. It activates your senses and doesn’t allow you to settle. Its uncompromising. The next track, ‘Shottas’ is another remix, this time by Munchi. It’s bombastic, with booming vocals going hand in hand with much heavier dubstep. This is a record not for the faint hearted. There is a worrying trend throughout the record that the repetitive nature does wear thin after a while. The tracks work best when they are short and snappy.

‘Native Puppy Love’ and ‘Moombahwow’ bring the record back on form with two stormers. They have a phenomenal tempo filled with pulsating beats and traditional vocals that would feel perfectly at home in any club scene. Normally you can comment on the cleverness and ability of the vocals but here we have yelling, we have shouting. There is hysteria on display here that is difficult to articulate. It is a cliché but you have to go with the flow.

As we bring the album to a close, the tempo shows no sign of slowing down. ‘Intertribal N.1 is a perfect example with the trio of DJs exhibiting their skills with production and musical manipulation down to a tee. The final track ‘General Generations’ is a total symbiosis of traditional Pow Wow with the modern styles of hip-hop and dubstep. We have vocals from the tribe of DJ Shub’s grandfather on display, which completes the cycle of old and new, ying and yang.

This record won’t be for everyone, I for one found it quite a difficult listen. The main criticism throughout the album is that it can become rather repetitive; you only need to glance at the levels of plays on each track on sound cloud. The drop off in interest from the midpoint is quite clear to see. It would be easy to dismiss this record but the truth of the matter is that it is a brand new style that brings the old and new together in an extremely unconventional manner. It takes some getting used to but you know what? It works. You won’t hear anything like this for some time.