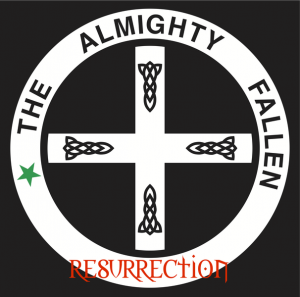 Belfast based rockers, The Almighty Fallen, manage to not only fulfil, but exceed all the expectations created by their- very modest- choice of moniker, with the release of their debut EP, Resurrection. Acclaimed as one of the hottest unsigned bands currently doing the rounds in Northern Ireland- which is no mean feat, as the competition present within the current scene is nothing short of cut-throat.- They have already played the Dublin National Arena whilst being televised to over 30 countries, and have played numerous other international showcases, particularly in their fledgling days. Their current line-up, now consisting of Phil Dixon (vocals), Marc Cumming (drums/percussion), Andrew McCallister (guitar), Joe Goudie (bass) and Matt Rice (keys).

‘Resurrection’ opens the EP on a rather thoughtful, soulful note- Dixon’s delivery is initially simplistic, serving to reflect on the- verging on- dark lyrical themes, before giving way to an equally effective style, more typical of classic rock vocalists, which is not unlike Myles Kennedy in places. Soaring, surprisingly melodic guitar hooks and electro tinges accompany what is certainly a powerful, if slightly understated, rock ballad. Somewhat reminiscent of Californication era Red Hot Chili Peppers, ‘Walk Away’ focuses primarily on a loosely structured series of underlying chords. Showcasing the band’s undeniable technical ability, it is wistful in tone, yet resiliently uplifting- this is pleasant, radio-friendly rock at its finest: distinctive enough to hold its own, and seemingly familiar enough to appeal to many.

‘My Desire’ is almost evocative of Peter Frampton’s ‘Show Me The Way’ in places, but quickly identifies itself as a homage to classic rock and roll. With meandering basslines, just the right amount of “hair metal” guitar tone, a heartfelt refrain and a resilient drum track, this is the closest that The Almighty Fallen are going to get to crooning- however, it is still very good indeed. Closing the EP, ‘Bittersweet’ contains more pared down guitar work and eventually morphs into a track that could easily have made it onto a Volbeat album- it is very listenable, but would perhaps do itself more justice in a live setting.

All in all, The Almighty Fallen are definitely worth listening to if you are even mildly interested in rock, classic or otherwise. Here is a band that manage to take all the typical elements of a rock song, and tinker with them until they manage to create a sound that is familiar, but somehow dynamic, and undeniably theirs (I assume that this has something to do with the fact that the band has two sound engineers amongst the members). Proving that they are indeed an act that live up to, and even exceed the hype surrounding them, these guys are undoubtedly ones to watch in the coming months.

Ruairi and the Owls – BadSleeperDayDreamer