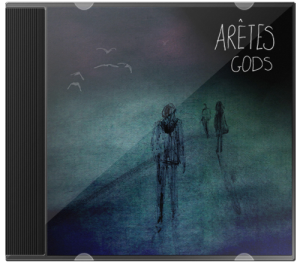 Aretes are a 7-strong band based in Belfast and London who make (prepare yourself…) Dream Punk Folktronica. I honestly had no idea what to expect but in hindsight, but their debut EP ‘Gods’ is exactly that, Dream Punk Folktronica. Each song is characterised by dreamy intros, song bodies with punk tones and heavily produced folk outros.

The initial track on this EP is ‘Would Be Gods’. The intro to this track was not something I expected from a band based in various locations as the instrumentation in the intro is something more commonly associated with the streets of Mediterranean Europe. From under this intro, a more familiar sound emerges. The body of the song bears considerable similarity to some of Coldplay’s work. When the heavily distorted guitar makes its inevitable appearance around 1:50 I immediately thought of our American friends, the Foo Fighters. Lyrically, the track speaks of the voice’s friend, Jimmy. Jimmy is a guy who is beaten, scared and is certain he was going nowhere.

Sophomore track, ‘I’ll Be Your Friend, You Be My Muse’ begins with a strong folk intro. The tone of the track goes perfectly with the story of the singer who feels alone in this world at the beginning of the song but finds a friend with whom to share stories never told and as the song progresses the singer talks of being “unweighted and free of this city.” The use of finger-picking is exclusive to this track and the riff runs throughout. The electric guitar makes another appearance to provide the punk requirement each track craves. When listening, be prepared to get lost in the repetition. A dreamy electronic lick in the later third of the song serves to break up what could eventually become a monotonous sound before leading back into the oh so familiar guitar picking.

‘You Know Me Better Than I Know’ begins with a line of spoken words and what sounds like a wedding planner in the background noise. This shows a character of the band that is mirrored in the track. Again, this song is lead by effects laden vocals. The instrumentation is reflective but manages to stay upbeat and bears some unexpected similarity to some of the melodies in Mac Miller mixtape K.I.D.S. Part of the melody is created by what sounds to me like steel drums. The instrumentation for the final third of the track is taken over by a mandolin.

Another track packed full of sky high effects features Binisa Bonner from Ruby and the Vines. In ‘I’m So Sober’, the drums take a role closer to the forefront than in previous tracks. The vocals push forward through the various effects more and at times the bass line stands out and adds more than just foundation to the track.

‘Gods’ is certainly something out of the ordinary and a definite must listen for any music lover. With their exclusive style, Arêtes are sure to carve out their own path a very crowded music scene.

◀ STANDOUT ⁞ You Know Me Better Than I Know ▶
◀ CONNECTION ⁞ MGMT ▶