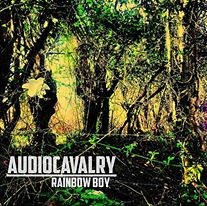 “The details are irrelevant, we just love making music” A promising opening statement from the Audio Cavalry boys. It suggests minimal fuss and a more organic approach to this EP’s production.

This immediately becomes apparent in the opening track ‘Vertigo’. The aptly named title sucks you into this musical washing machine. Everything is fast-paced from the onset and then you’re kicked in the ear with the remarkably uncanny sound of a more refined Kurt Cobain. Although the sliding raw vocal would hugely complement a live set, to some it could portray perhaps a too rudimentary finish. However amidst the standard three quarters of the way through a song key change, the vocals tempered with a little digital help takes on a haunting, distant quality that marries perfectly with the underpinning of the plucky, tingling guitar.

The quivering, gentle guitar plucking is carried through to ‘Betty Blime’ and feels like water droplets on a still lake. The quieter, more relaxed tempo is a perfect backdrop to highlight Hogan’s distinctive crude vocal. This abruptly breaks and gives way to remnants of a primitive Chilli Peppers and even hints at a young Nirvana.

Tackling a Lana Del Ray cover is a bold move from the County Down quartet and they certainly slap a great big Audio Cavalry stamp on it. Sounding very little like the original except for the vocal pitching, the boys deliver an instrumentally impressive sound.

Then we come to the title track, so far I’m mildly entertained but in this case the boys have beyond a doubt saved the best for last. ‘Rainbow Boy’ is such a well thought out, instrumentally, vocally, exceptionally produced sound that I feel like I’m in a secret recording of an early Stereophonics record. Listening to this on repeat for the foreseeable future, ear drum – you’re welcome.