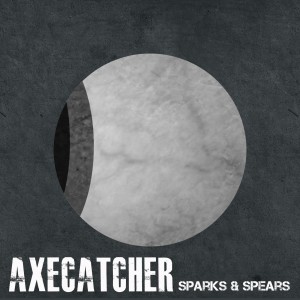 Hardcore rockers Axecatcher consists of three young dudes from Limavady, drawn together by their mutual love of heavy music. Forming in 2011 and gaining attention almost immediately on the local gigging scene, the trio – Ryan Montgomery on vocals/lead guitar, Colin Wilson on backing vocals/bass guitar, and Danny Kaye on drums – released their epic seven minute long first single ‘Odalisque’ in 2012. Their new EP ‘Sparks and Spears’, in its unusual cassette tape format, was released in February of this year.

The EP opens with the brilliantly titled ‘’Circle Pit Roller Derby’ (great description of a mosh pit!). The sound is fast and furious, with a crunchy, driving riff. The song has a hardcore vibe with a definite punk edge, similar to Cancer Bats or While She Sleeps. Ryan’s vocal style is all visceral roars and impassioned screams, rather like frontman Loz from the aforementioned WSS, but in a higher pitch. The backing vocals from Colin Wilson are cleaner and deeper; the two harmonize well together.

Second track ‘Seismic Toss’ is of a similar speed and style to the first track, with a galloping riff and extra squealing guitar. It also has an intriguing Sabbath-esque tinge to it, particularly on the outro.

Then a total change of pace occurs for the last two songs. ‘Methuselah’ sees Wilson take lead vocals – briefly! The song clocks in at a compact 50 seconds, and its sound is rather reminiscent of Bring Me the Horizon, another band unafraid of using ‘quickies’ on their albums (this actually sounds a bit like the rather expressively titled ‘No Introductions…’ from BMTH’s album ‘Suicide Season’).

Final track ‘Youfinder’ was the highlight of the EP launch gig earlier this year in Auntie Annie’s, and remains so on the EP itself. Right from its thrashy intro it is immediately catchy, with its intricately intertwining lead and bass guitars and its staccato drumming. As the song progresses it clearly demonstrates just how quickly this band’s songwriting skills are progressing.

The most impressive (and enjoyable) aspect of this EP is how just four songs, none overly long in duration, can display such promise and variety, without ever being jarring or disparate. The EP is a lively and pleasing mix of hardcore, punk, prog and heavy rock. The band has progressed at an astonishing rate since their formation a mere two years ago; based on this EP, they are definitely ones To watch.