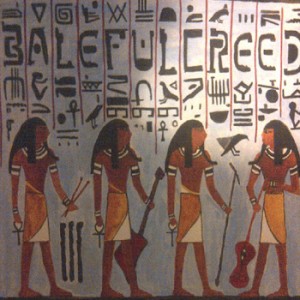 The imaginatively titled ‘III’ is Belfast rockers Baleful Creed’s third EP release. Since their formation in 2009, the lads have garnered rave reviews and prestigious support slots, as well as several Distortion Project gigs. ‘III’ shows a clear evolution in the band’s talents; they have never sounded tighter or more confident.

While their first two EP’s relied on the classic ‘stoner rock’ sound, ‘III’ is leaner and altogether meaner. Vocalist Greg ‘Fin’ Finlay’s vocals are rich and warm, and meld seamlessly with the band’s galloping drums and dual guitars. On ‘III’, they sound less ‘stoner’ and more of a fist-pumping cross between Sabbath at their most bluesy and The Cult at their most pissed off.

The EP opens with the crunchy guitars and dirty, groovy beat of ‘Double F.S.’ When the lyrics kick in…well. It’s clear that the band can certainly live up to their ‘Baleful’ moniker! Finlay hisses and spits, really meaning business. Track three, ‘Thorazine’ takes a pop at internet “trolls”, snarling “explain my actions to you, you people don’t have a clue”.

Musically, this EP is sharper and more experimental, such as the lush harmonising on ‘Autumn Leaves’. Final track ‘Misanthrope’ is the song with the closest links to their earlier work. It’s Seventies sound actually comes close to being a bit generic, but the unusual time changes and uptempo ending pull it back from the brink.

The band’s willingness to think outside the box, brilliantly showcased here, will undoubtedly stand them in good stead in their future career. When they hit their stride – as they do several times – it is pure toe-tapping magic. A highly enjoyable EP.