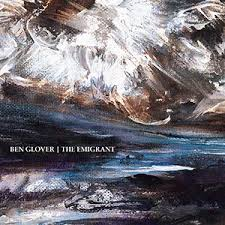 There is one thing that can be said about the music scene in Northern Ireland. It is so deeply intertwined with the culture and heritage of this Isle of Ireland that I shouldn’t be surprised to come across such sterling acoustic folk artists like Ben Glover.

However, I am. The Emigrant comes about in a local music scene laden with stellar acoustic musicians and blossoming folk artists. And.  you may be wondering why Ben Glover stands out? His sound has the most traditional aesthetic to it. Of course that traditional Irish acoustic is bolstered up Glover’s nods to some of the biggest and greatest names in Irish music, and no, there isn’t a U2 song in sight

His gritty vocals, complimented by truly beautiful strings from start to finish. Opening track ‘Parting Glass’, a wonderfully edge cover of The Wailin’ Jenny’s, conjures images of dimly lit, traditional pubs, filled with old gentlemen drinking Guinness and a burning turf fire. The imagery carried in his lyrical and music composition isn’t something you come across that often. And despite the fiery opening The Emigrant mellows out somewhat over the next nine tracks.

One of my favourite features of the album has to be the track names. Taking you on a journey by themselves, they help cement the album firmly in Irish tradition and culture and give Glover a place among the great Irish folk artists of our wee country. There are a number of tracks that I get utterly sucked into on this album. The title track is certainly one of them, surpassed only by – in my opinion – by ‘Heart In My Hand’. I am a sucker for a track featuring violins. And although there are a couple on The Emigrant, there is something about ‘Heart In My Hand’ that really wins me over.

It may be the perfect combination of Glover’s vocals, and strings, with wonderful storytelling through carefully crafted lyrics but, it has stuck with me. As has ‘Dreamers, Pilgrims, Strangers’ a short, sweet, upbeat number that again wouldn’t go amiss pouring out the door of a thatched roof pub in the deep green countryside of Ireland.

The Pogues and The Dubliners, respectively, have done wonderful versions of ‘The Band Played Waltzing Matilda’. Now Ben Glover has produced another stunning version. Nestling himself between those two icons of Irish music. A truly great listen from start to finish. Varied, sombre, catchy and beautiful, the only bad thing I have to say about The Emigrant is that it is too short.