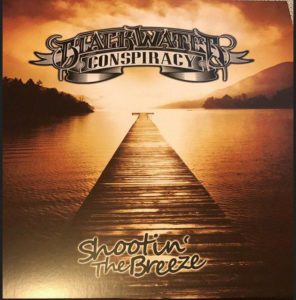 Thanks to my enforced sabbatical from writing this Summer, I have had ‘Shootin the Breeze’ by Tyrone’s Blackwater Conspiracy for a couple of months now. This has been a blessing during a period where I was not feeling particularly blessed thanks to my troublesome spine (but enough of my woes). A blessing because it has given me time and some distance in which to properly judge an album that, on approaching, I was nervous about hearing and subsequently reviewing. Why nervous you ask? Well, for a start I absolutely adored Million Dollar Reload – and in terms of line-up, Blackwater Conspiracy is Million Dollar Reload minus one member and a new member added – but they are different and I was nervous I wouldn’t be as struck with the new sound as I was with the old sound.

I won’t go into the details of that split – it happened, it was painful and untimely (the band were in the middle of a very prestigious support slot with Blackberry Smoke) and the remaining members had to deal with it and decide how to proceed. Their decision was to fold M$R and form a new band with a new sound. Where M$R were an in-your-face amalgam of ‘DC, Guns n Roses and Skid Row – full of meaty riffage and big choruses delivered with Phil Conalane’s Bonn-Scott-like wail, Blackwater Conspiracy are a slightly more laid back, countrified, Southern Rock band – not unlike Blackberry Smoke themselves or The Black Crowes (there’s a ‘black’ prefix thing going on here). The riffs are subtler for the most part, Conalane’s wail is still there at times but we hear a lot more of his other registers, which is a pleasant difference (and must be easier on his larynx). The rhythm section of Kie (bass) and Fionn (drums) are still as rock solid as ever, but allowed to be a little looser. Then there is the new addition – Kevin Brennan on piano/keyboards, and this is where the real departure lies. He really adds a touch of extra class to an already classy batch of songs. I don’t think these songs would sound half as good without what he brings to the party. What he gives the band is a real authentic Southern Rock feel which goes back to the heady days of the Allman Bros and Lynyrd Skynyrd. That was the template for Southern Rock nearly 50 years ago and it remains the template, and it is a musical template I happen to love.

So again, nerves arose because I am such a fan of this style of music, but I wanted it to sound natural and not contrived. I was at that final M$R gig where they morphed mid-set into Blackwater Conspiracy and, while I enjoyed it, it did concern me at the time that perhaps they were going to sound like amateurs compared to the professionals – something M$R never did – given their debut album is one of my all-time favourite debuts. The debut single ‘The Monday Club’ (reviewed here) was a decent enough introduction to the new band, and a live version of the excellent ‘Penny For Your Dirty Mind’ was also doing the rounds of social media. It was promising enough. But would a full album convince me, a Skynyrd nut, a Black Crowes fan, that an N.I. band could really put together a genuine Southern Rock album?

Well button my britches, they sure have!! My nerves were unwarranted, my fears baseless. ‘Shootin the Breeze’ is a classy album full of memorable songs. There isn’t any better way for me to judge anyone’s music than if am I still humming it 2 months later or still wanting to play it now after listening to it non-stop for weeks. The album feels natural from those first few laid back bars of ‘Blackwater Swagger’ (echoes of ‘Exile on Main St’ era Stones), which is really the band’s statement of intent. It is their way of saying, ‘we’re from the country, we know what we’re singing about, we know what we’re doing – watch us walk the walk’. And they do. Overall, the album has the feel of The Black Crowes debut, ‘Shake Your Moneymaker’. That too was a very good album, a great introduction to a band finding its way, just as ‘Shootin the Breeze’ is for B.C. The Black Crowes would go on to better things than that debut – their sophomore release ‘Southern Harmony and Musical Companion’ is probably in my top 20 all time albums (maybe even Top 10) and I would point to them ditching a few of the more frivolous Rock n Roll tunes found on ‘Shake..’ and really finding their groove on ‘Southern…’ And I am saying that because,  while I believe that ‘Shootin’ the Breeze’ is a great debut, there are songs on it that show that they really have a signpost to an even better second album. I say this because, for my money, it is the slightly more gritty/serious songs on the album that I love the most. Don’t get me wrong,  the aforementioned ‘Blackwater Swagger’, ‘Waiting on Hollywood’ (wonderful opening piano riff which is then replicated by the guitars), ‘Penny For Your Dirty Mind’ and the title track are all top notch, memorable songs. And the songs I haven’t mentioned are still well put together and performed, and could very easily be someone else’s favourite songs on the album. There is no filler here.

But, for me, ‘Hanging Tree’ and ‘President Joe’ are another step up in class. These two songs stand out as the songs that hold the most promise in terms of the band showing it has its own authentic voice. I like the openness of the lyric in ‘Hanging Tree’; the vulnerability that is shown by the writer. If the bulk of the album is a Rock n Roll party, this is the hungover introspection when all the revelers have left, your house is trashed and you are alone, broke and wondering where the hell your life is going. It strikes a chord because of the suggestion of suicidal thoughts, and suicide is the biggest killer of young men under 30 in N.I. ‘President Joe’ begins with a cool bass line, fantastically laid back piano and guitar from Brian ‘Bam’ Mallon, but again it is the subject matter that holds the attention and makes the song more than just another party tune. Joe is tramp the writer sees everyday as he goes about his business. At some point the writer’s view of Joe shifts from pity to some sort of admiration, even envy, of the lack of responsibility Joe has compared to him. Have to say, the pre-chorus lyric, ‘And a murder of crows on a high wire, breaks off and takes flight’ is an absolute killer (what’s not to like about the use of a collective noun?).

So. They have done it. They have convinced this jaded, slightly cynical, aul Southern Rock fanboy that they can do it. They have risen from the ashes and rubble, reinvented themselves and come out with all guns blazing, and produced an album that will keep old  Million Dollar Reload fans happy but make stacks of new fans, if there is any justice in the world. The album entered the Top 20 of the UK Rock and Blues Chart and stayed there, thanks to its quality and the festival performances the band did this summer (with excellent reviews from press and fans alike).

The King is dead. Long live the King.