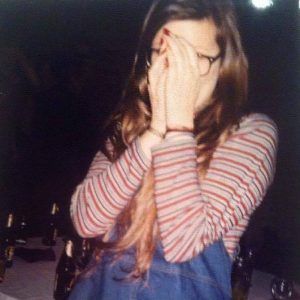 Very few people were surprised when indie pop poppets brand new friend won Chordblossom’s Kickstart competition back in March this year (you can read all about their triumph here): their sugary sweet pop tunes both charmed and piqued the interest of all involved with their deceptively simple construction and surprisingly stinging lyrics. A few months later they released their debut EP American Wives; we’ve finally had the chance to have a listen to it and see if it lives up to the promise they showed.

The five track EP begins with the snappy title track. At one minute forty eight seconds, it’s perhaps a bit too short, but it certainly does the job of introducing the listener to the band as it’s a lovely, sweet slice of perky indie pop. It’s followed by lead single ‘I Was An Astronaut’ which offers more of the same, complete with tinkly keyboards and gently jangling guitars. The juxtaposition of its rather pointed lyrics and the shiny, smiley music is an interestingly mature step for such a youthful group of musicians.

Co-vocalist Lauren Johnson takes the lead vocal on next track ‘I Love You, Goodbye’ and a beautiful job she does, too: it’s hooky and radio friendly and charming, the audio equivalent of diving headfirst into a big bag of fizzy sweeties. ‘Settle Down’ shows more of that lyrical maturity, with some insightful and rather wistful lyrics combined with the summery vibe of the song; siblings Lauren and Taylor’s harmonies are particularly winsome here.

Final number ‘A+E’ has a more overtly melancholy feel as it details the rise and fall of a relationship with much less saccharine perkiness than the other four songs. Although it’s a rather downbeat ending to the EP, it certainly demonstrates that brand new friend have more than one string to their bow.

Based on this debut, it’s clear that brand new friend were worthy winners of Chordblossom’s Kickstart contest this year. The EP is well produced, easy on the ear and shows a marked maturity for such a young band. We will certainly be following their career with a keen interest.

The Crawling – In Light of Dark Days