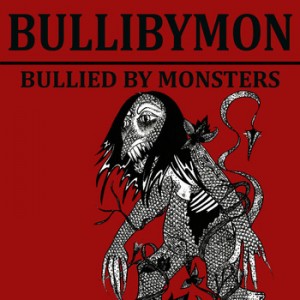 When Chordblossom last encountered Bullibymon, at a live show supporting Gacys Threads, the conclusion was that the band needed to “hone their identity and sound”. Fast forward to six months later, and the lads have released an EP entitled ‘Bullied By Monsters’. Is their sound any more direct and refined than it was back in February?

This is a band that clearly wears their influences on their sleeves. The likes of Lamb of God and Gojira can be heard in their roaring vocals and big, brash sound, whilst there are clear traces of QOTSA in their melodies and riffs. They also show a definite grindcore influence, as well as the doomy sludge of, say, Black Sabbath or Mastodon. There’s even a shade of funk rockers Red Hot Chilli Peppers and Rage Against the Machine in there! That sort of answers the original question, doesn’t it…

The EP opens with the title track. It starts off ominous, slides into funky, shows off a bit of grindcore vocals with some Sabbath-y riffs. The lyrics, about being, ahem, bullied by monsters, are furious and almost punky in their delivery.

This ‘mash up’ style continues into second song ‘John Williams’. Its long intro is actually quite classically influenced (classic rock, of course!), with quite a funky bass guitar break. The whispered lyrics are menacing and urgent (“can you hear me, are you listening?…this is my voice!”), and give the impression that vocalist Brum is either really passionate about what he’s singing about, or at death’s door. Or both, maybe.

Third track, the indelicately named ‘Shower of F**king C**ts’ again mixes a Sabbath vibe with RATM funk. The deep, ominous riff grinds its way through the song, mixing with the hardcore-style vocals with some success. The combination of clean and screamed vocals seems a bit awkward and ‘tacked together’ at times, however. Drummer Glen really earns his money in this one – that thundering double-bass beat is immense!

Final number ‘What’s That Skipper?’ shows the band at its punkiest yet. The mix of metal and punk should make it pure grindcore…except it doesn’t. The Sabbath influence gives the song (and the entire EP, for that matter) the melody and structure that grindcore generally lacks.

So. It’s clear from the high standard of musicianship on ‘Bullied By Monsters’ that Bullibymon are a talented bunch. But again, there’s that nagging feeling of something being slightly off, of too many genres being squashed into the songs. Mash ups are all well and good for the likes of ‘Glee’ (what? What’s wrong with ‘Glee’?), but in metal/punk/grindcore/whatever we have here, it simply makes the resulting music too busy, too fussy. Hone, boys. Hone!

And So I Watch You From Afar Begin US Tour