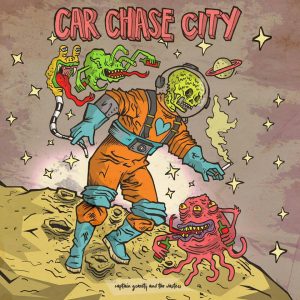 Fans of Tenacious D may recognize the name of this spunky, alternative-pop-punk quartet from Belfast. Originally formed in 2013, their latest release, Captain Gravity & The Wasters is definitely going to take them places.

Opening track ‘Zero Gravity’ has something very Biffy Clyro about it. It is a strong opening track, setting the bar high for the rest of the EP. And the band more than deliver on listener expectations. The vocals are harmonised wonderfully, choral and anthemic. The beat is solid and driven by a solid, bold bass line and heart-pounding drums.

It’s unfair to single out any of the tracks on this EP. There may only be three but they are all bloody brilliant in their own right. And although they can stand on their own as singles, they play off each other in a superb fashion. A testament to Gerard, Phil, Joe and Dave’s creative cohesion, passion and bromance.

You can hear how passionate they are about their music in each chord and chorus of each track. And you can hear how their own teenage music loves have played into the creation of their own music. The bands musical composition, very subtly, nods to some of the greatest Pop Punk artists of the nineties and early noughties. Blink 182, Green Day, The Offspring to name the more widely known

As someone who spent their rebellious teens plugged into Kerrang! and a portable CD player loaded with Jimmy Eat World, Blink 182, Bowling for Soup, Sum 41 and Good Charlotte, Car Chase City brought me back to the heady days of my youth, head-banging in The Venue.

Car Chase City have something that other pop-punk alternative ensembles breaking the scene don’t have. A Belfast accent. It may not be the prettiest accent but, when it comes to music of this genre it works so incredibly well. The otherwise drole tones of the Belfast accent have taken on a spunky grit that suits this genre so well.

Closing track ‘Look at Me, I am the Captain Now!’ (which I am pretty sure is a line from Captain Phillips) has an incredibly catchy chorus – “what would you do with a drunken sailor” – it is a wonderful hook. As the last track on the EP it does leave you hanging, waiting for something else. Three powerful tracks and the strength and punch established in the opening chords of ‘Zero Gravity’ carries to the last beat of “Look at Me, I am the Captain!”.

I was definitely left wanting more from this EP, it’s only fault being it’s brevity. But it is so full of promise that I can only imagine how mind-blowing Car Chase City’s first album will be. And if like me, you are totally taken aback with the band and their phenomenal sound then their back catalogue is certainly worth a listen.

They have always been a strong, well rounded, refined sounding pop punk ensemble but Captain Gravity & The Wasters has a maturity to it that comes with age, hours of practice and plenty of experience. Northern Ireland is laden with great alternative bands but the presence of a truly phenomenal pop-punk band seems to be a rarer discovery. Definitely a band worth watching in 2017, having played a smattering of popular gigs and sold out shows in 2016 things are looking up for these four amigos.

Watch: Ryan Vail and Jealous of the Birds – Love Is A Crow

Why Not Her? : Meeting gender disparity in the music industry front on