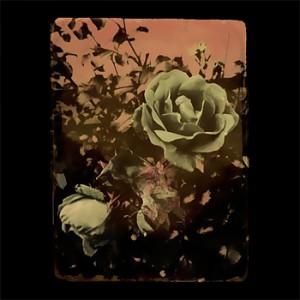 With the likes of Pinkish Black citing Joy Division as an influence and In Solitude channelling Bauhaus and Fields of the Nephilim on the recent ‘Sister’ LP, it’s clear that 80’s goth/post punk has burrowed it’s way into the mindset of a generation of metal musicians. This crossover is evident in this release from American one man band Dusthallowed.

Main man James McCrea has been an active member of the noise scene for a number of years. Under such monikers as Narcotic Dream and One Lifeless Eye, he creates noise that balances the atmosphere and intricacy needed for such a genre and the harsh, brutal force that wakes the listener from their self imposed docility. ‘Our Hands Tremble’ is more traditional fare (guitars, bass etc) but just as effective.

‘Harvester’ opens with (what sounds like) heavily treated breathing before a gently picked chord builds to a crescendo of keyboards and drums before moving back to the gently picked chord. In certain ways, it evokes a similar mood to ‘Rundtgåing av den transcendentale egenhetens støtte’ by Burzum where the minimalism becomes hypnotic and stretches time. It feels like a three minute track instead of a six minute one.

The driving without being plodding bassline gives ‘Black City’ a more aggressive edge (while bearing more than a passing resemblance to ‘Money is Not Our God’ by Killing Joke) before collapsing in on itself though trebly mixing. The samples of various voices sounding like they’re shouting at each other makes the listener envisage the voices trapped in a burning building, fighting each other to get out. Very, very effective.

Truthfully, it’s difficult writing about a record like this. You can try and describe it as best as you can, but what you’re doing instead is denigrating the album. It needs to be heard to be understood.

The inclusion of Voivod and Bathory covers makes a change: instead of a metal band going goth, the goths have gone metal without losing the importance of post punk experimentation. In the case of ‘Our Hands Tremble’, the key is the use of noise. It isn’t shoved on for effect like a lot of guitar based bands do to make them seem “out there”, but is an integral part of making the LP’s menacing mood.

As far as this writer is aware, McCrea has no intentions of playing this material live or performing under the Dusthallowed name. In many ways, this is the right decision to make. This music is too reliant on atmosphere and the only way it could be recreated successfully live is if there was total silence among a paying audience. And that’s not very likely, is it?

Excellent work all round.