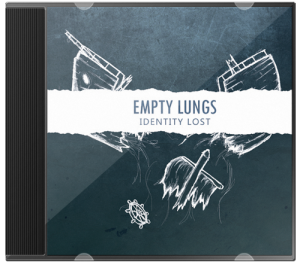 From years of playing punk rock in the Northern Irish music scene I know how hard it can be. Especially for a band that are influenced by the likes of Hot Water Music, Jawbreaker, Lawrence Arms etc…I know the guys from Empty Lungs, they are great guys, good friends and have a lot of passion for what they do. I have watched the band grow since their formation in May of this year and they have moved mountains in such a short time.

Friendships aside I am here to review their debut EP ‘Identity Lost’.

Title Track and single from the EP, Identity Lost, is a bouncy, forceful mission statement of a three piece who deliver every inch of emotion on stage and on record. You may have seen music video directed by the very talented Sean Duncan of Red Cap Productions. The pace doesn’t not stop after the single like so many releases of the genre. In fact it is the only beginning as any song on this blistering 3 song debut could easily have been the single. Laced with broad, forceful vocals, driving bass, and battered drums the EP shows the potential for such a band that have been in the scene for years

Bands that the members EL have been in include; The Lobotomies, Bomb City 7, Snitch and The Hammer Bros. Empty Lungs have obviously found their place, each member was MEANT to be in this band. All others can be attributed to the learning curve.

My only criticism of the EP is that while I am writing this it is very possible that Chuck Ragan is on the phone to his lawyer asking if any members of EL have purchased any of Hot Water Music’s material over the years. But don’t take that away from this release, being influenced by what I consider one of the best bands in the world of all time can never be a bad thing.

Ruairi and the Owls – Rip Through Her Sky