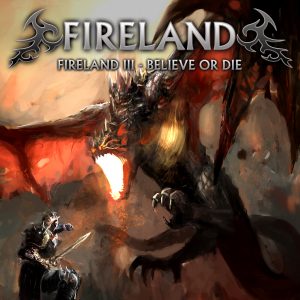 We at Chordblossom have always been extremely proud of the musical diversity this tiny place produces. From ground-breaking punk (The Undertones) to NME-worthy alt rock (Snow Patrol) to grumpy aul men who sing like angels (Van Morrison), we really do run the gamut here; there truly is something for everyone. For instance, did you know one of the best power metal bands in the world come from good old Norn Iron? If you didn’t (or even if you did), come this way and here a tale of love, death and international connections.

Fireland formed way back in 2003 from an enthusiastic bunch of local musicians including Steve Moore (Stormzone) and Andrew Baxter (Irontown Diehards). Many have come and gone since then, with Moore remaining the only original member. They released their first EP soon after forming, with a self-titled debut album following in 2008. After releasing a second EP in 2010 (Fireland II) the band fell silent. Then, towards the end of 2016, their social media platforms stirred into action with the promise of a new album, as well as a new vocalist in the form of Chaos Frame’s David Brown, whom Moore found in America as he searched for a singer to match the epic nature of the band’s new material. Fireland III: Believe or Die is the result of this connection.

Lead single ‘John Rock’ opens the album is suitably dramatic fashion, all power metal intro, slick riffs and a glorious, soaring chorus. Brown’s voice proves to be more than enough to convey the grandeur and passion of the music, as he spreads his wings and dazzles the listener with a powerful, at times almost operatic vocal performance.

From there the album barely pauses to allow the listener to catch their breath. This is a real ‘kitchen sink’ album, in keeping with the power/classic metal style, so  you get lush harmonies, thick and meaty riffs, galloping drums and joyous guitar solos thrown in, all mixed expertly by the talented Moore in his FireMachine Studio. Particular highlights are ‘My Enemy’s Enemy’, which showcases Brown’s vocal range to perfection; ‘Ironclad’, which tells the story of a “lonely mercenary” in an almost hard rock style, rather reminiscent of Whitesnake’s ‘Is This Love’; the clever time signature of ‘Burning Scarecrow’ (props to drummer Chris Mawhinney for expertly anchoring the whole thing); and the hammering ‘Hate Will Live On’, which contains the best, most epic guitar solo on the album.

There are, however, two songs which just nudge ahead of the rest, the first being album closer ‘Rise Again’: its chunky riff, epic chorus (those high notes!) and sumptuous instrumental section end the whole album on an uplifting note (if you’ll pardon the pun). And then there’s the one at the top of the pile: ‘Fallen II’. A sequel to ‘Fallen’, which was on the band’s first album, this nine and a half minute track is epic in every sense of the word, from its acoustic/string sections, to its dramatic vocals, to its proper storytelling lyrics and galloping beat. It allows every band member to shine equally and is simply a power metal masterpiece. Listen to it. NOW.

It’s been a long time between drinks for Fireland fans, but Fireland III: Believe or Die is certainly worth the wait. Slick, accessible, and giving zero fucks about being ‘cool’ or ‘sick’, it’s simply a joy to listen to; the sort of album you stick in your car’s CD player, crank the volume and bellow along to unabashedly. Guitarist and engineer Moore has pulled everything together beautifully, while unleashing the sort of exemplary guitar work that we’ve come to expect from him. Power metal. From Northern Ireland. Yes, really. And it’s brilliant.