Friends of Emmet – No Surprise 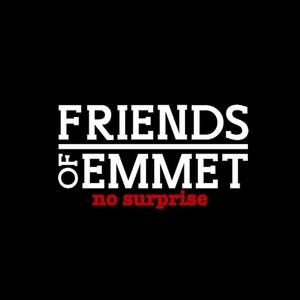 Friends of Emmet (otherwise known as F.O.E) and a mainstream pop band originally from Dublin, but currently based in sunny Los Angeles, California. Their debut E.P ‘No Surprise’ is an E.P. demonstrating both vocal power and a clean sound resembling aspects of both U2 and David Bowie.

The first track from their E.P, ‘No Surprise’, begins with a light-hearted, celebratory tone which is hushed by captivating vocals and emotive lyrics about accepting the demise of a relationship. The power of the vocals is showcased in the chorus by harmonics, which, with the use of brass instruments, brings a jazz-vibe to the song. The simplicity of the verses is heavily contrasted by the explosion of energy brought on by the chorus. A distorted solo in the bridge affirms a pop-vibe which, accompanied by whistling, adds a sense of contemplation which echo the emotive lyrics of the chorus. The chipper tone plummets back to reality as the song is stripped to merely piano and vocals, briefly creating a hurt and wounded emotional whirlpool. The tone soon picks up to where it once left off, and the jazz vivacity of the song fades.

‘Headlines’ is the second track from ‘No Surprises’. Immediately a soft, refined song similar to the gentle sound of Snow Patrol is established. A simple 4/4 beat in drums adds intimacy to the lyrics which helps the song to build into a powerful chorus with the help of the harmonic guitar. Backing vocals perfectly compliment an impactful chorus and add a new dimension to the track. The bridge contains a distorted guitar that brings an element of rock to the song that is reiterated from as the guitar briefly steals the limelight with a solo. When vocals return there is an atmosphere reminiscent of listening to a classic U2 ballad. The song ends with a cadence echoing into silence.

F.O.E’s third song ‘13th Floor’ begins with an introduction of ambiguous instrumental, and evolves into a silent guitar accompanying percussion and vocals to create a sense of mystery. The chorus reintroduces the illusive guitar from the introduction to create an element of wonder within the track that draws the reader to listen further. Lyrics portraying images of a girl dying in a hotel room present a much darker aspect to the band than is previously demonstrated in the other tracks. The bridge builds to make for a more impactful chorus The song ends at a climactic point with lyrics suggesting sinister intent amidst the passion of the vocals.

The fourth and final track from the E.P. is a cover of ‘Try’ by Pink. The song begins gently with merely a piano. As soon as the vocals are introduced the listener is rendered empathetic of the pain and hardship referred to in the lyrics. The chorus is much more stripped than the original version of the song, which allows the vocals to make a passionate and impactful impression. The intentionally non-complex nature of this cover adds intimacy to make this cover a tear-jerker.

Friends of Emmet brings forth some of the best aspects of musical modern-greats, and incorporates them into the band’s original sound in their pop masterpiece ‘No Surprise’. Even though this is a debut E.P for the band, their profound charisma is bound to lead them to a great future