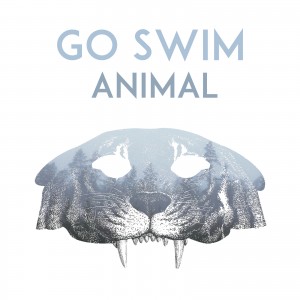 What happens if you mix the following ingredients? An indie, post punk sound + unapologetically catchy choruses + fast beats + a hint of the NI attitude…. The answer is, you end up with one of the most exciting new Northern Irish bands of the year, Go Swim. Having only just released their first EP, ‘Animal’ they are due to be the main support act for Kaiser Chiefs at Falls Park for the climax of Feile an Phobail. Dizzy heights indeed for a band so truly in their infancy. However, upon listening to the new EP, infancy would not be a word to describe this.

The 4 track EP starts with the foot tapping, head nodding, title track, ‘Animal’. From the get go, this is fast paced and energy charged, symbolised in the reoccurring lyric ‘wake the dead’. Like Two Door Cinema Club the NI accent, vocally shines through at just the right times. A well structured track that will get the crowd jumping along, it’s easy to see why this track was chosen for it’s titular role.

‘Call Sign’ barely let’s up for 30 seconds before we are back with more fast beats. A more melodic sound is intermittent and brief, between the drum pounding and guitar plucking. In this track we get to fully sample the male/female vocals dynamic which gives the band a further dimension. The culmination of this as well guitar riffs is simply delightful.

‘Automate’ has a slick portion of synths added to it with again, tailor made sing a long choruses. The track feels Delorean esque as it flirts with becoming a fully fledged disco track. The final track, ‘Off The Trail’ is a return of the drum led fast beats and rounds the showcase off well.

Go Swim have themselves a sound that could be likened to Foals, only if Foals, have had a 4 pack of their favourite energy drink. The high tempo pace of their tracks with the over arching post punk indie sound can only be a good thing. Their sound is cool enough to be legitimately indie, with added choruses, catchy enough for them to be noticed by the masses.

The sound is of the moment and has potential to take them places. An album full of this please.

Belfast To Be Turned ‘Inside Out’ Throughout August