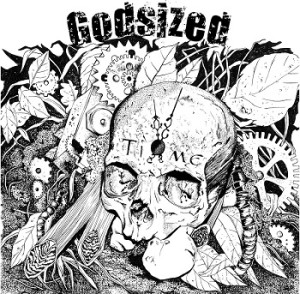 Rock quartet Godsized have been leaving their mark on the rock scene over the last few years, by playing gigs and festivals all over the UK.  After much anticipation the band will be self releasing their debut album ‘Time’ on April 22nd.

Upon sampling, it’s an album the band and their fan-base should be extremely proud of. From the opener ‘Soultaker’ you will feel your ears stand to attention to the loud,choppy riffs. Glen Korner’s vocals aren’t typically of your screaming, nails-scratching-in-the-back-of-your-throat variety that you’d expect to hear from a hairy bearded men of metal. Instead think a little mellower on the rock spectrum; Myles Kennedy (Alter Bridge) meets Chris Cornell (Soundgarden). The new single ‘Heavy Load’ is a stand out track on the album, it’s packed to the rafters with roaring riffs and will have you singing along to the melodic chorus even after just one listen.

Throughout the album amongst the soaring guitar solos and thrashing drumbeats there is plenty of evidence of the bands influences. Black Sabbath, Black Label Society and Led Zeppelin are all married into a musical sound that puts a modern edge on Godsized’s inspired classic rock sound.

By the time ‘Moving On’ comes around, your neck muscles will already be beginning to feel the strain. The powerful pre-chorus leading to the melodic chorus will have you wanting to join a beer fuelled mosh pit as soon as possible, where one imagines the album played live in its entirety would give it the justice it deserves.

‘One More Time’ stands out in its own right as it has very chilled out acoustic feel, though that’s not to say it’s not out of place on this album and it’s nice to have a break from all that moshing.

The fact it is a self released, debut album by Godsized is astonishing and should face very little competition in the field, also proving that the British Invasion sound is still a predominate force within the classic rock scene, even now in 2013.