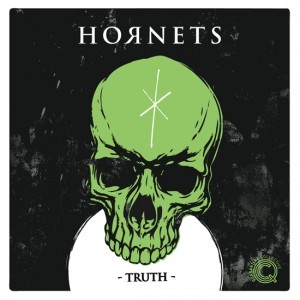 The current musical landscape may be seemingly overflowing with plenty of everything, yet there is a drought of sorts going on. Somehow, within this massive boiling pot of music, full of almost every genre imaginable and then some, it is becomingly increasingly difficult to find hardcore bands with real Jaws-worthy teeth amidst the flash flood of indie.

So who will save us from the bland, side-fringed and soft voiced bubblegum rock that runs the risk of losing its flavour if it becomes any more over-saturated? Is it a bird? Is it a plane? Wait- is it Clarke Kent?

Don’t be silly- it’s some Hornets!

Hornets, as the name may suggest, are a vicious, venom stinging swarm of uncompromising, downright psychotic guttural metal and rasping, raw hardcore punk. The trio – consisting of Andy Shields, Ricky McAuley and Sib (previously of Team Fresh, Panama Kings and Bomb City 7 fame respectively) are no newcomers to the scene, and it seems that with their experience and capacity for musical brutality, they’re onto a winning combination.

Opening with the title track, “Truth”, the listener is shoved headlong into the seismographic riffs, the trademark cutting, barbed wire vocals and maniacal drumming, before the musical whirlwind comes to an abrupt halt made up of a wall of jittery sonic feedback.

The rest of the EP is a crashing, jarring, old -school hardcore frenzy. The full on torrent of energy that is “No Control” would make any Converge fan worth their salt swoon, and the blistering “F Strings” contains guitar work and a breakdown reminiscent of “Toxicity” era System Of A Down and Rage Against The Machine at their musical peak.

Closing on the face melting “Weekend Warrior”, I challenge you to listen to this EP and not feel the urge to either snap your vertebrae head banging or to want to punch through mountains. I duly promise that that isn’t hyperbole, as “Truth” is a colossal EP that will hopefully gain an equally mammoth following.

One final gig for Auntie Annies