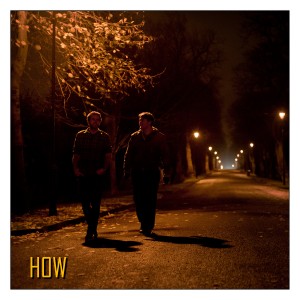 HOW were one of the surprise packages in our Kickstart 2014 competition. The little known and fairly recently formed group from Armagh made it through to the final 20 of the competition with their track ‘Woo Hoo’. The track was taken from the band’s debut EP released at the end of last year, the self titled ‘HOW.

Recorded at Big Space Studios in Newry, HOW features four tracks, each cut from a similar cloth. The first track is a little number entitled ‘Woo Hoo’. The vocals here are at times reminiscent of Modest Mouse’s Isaac Brock, with a theatrical tinge coming through. The song has an energetic guitar break and more than a few woo hoos and hand claps, which might sound a bit nauseating but far from it. They’re all part of the song’s unique charm. With lyrics of “Don’t you worry about a thing, I got it all under control”, ‘Woo Hoo’ is probably the strongest track on the EP.

It’s hard to pinpoint the exact genre that HOW has produced here, which is to the band’s credit. There’s certainly folk tendencies, most strongly realised on the tracks ‘Mary Jane’ and ‘Lost Faith’. These two tracks feature some prominent acoustic guitar and fairly stripped back drums – plus some more hand claps in ‘Mary Jane’. ‘Animal’ meanwhile sounds a lot closer to an indie-pop track with the pace a bit quicker, the drums fuller and the guitar more jangly. ‘Lost Faith’ is the band’s slower and more emotive effort here.

HOW have put together a very neat package with their first EP. There’s plenty of charm to be found here, particularly on the first couple of tracks with their folk-pop sensibilities. Keep an ear out more.