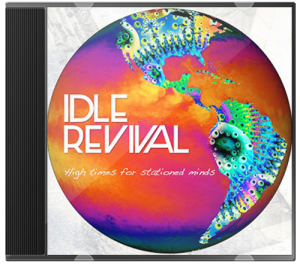 This EP shows how versatile Idle Revival are, without straying too far from their strengths. It’s difficult to get noticed in a crowded Northern Irish indie scene, but with ‘High Times for Stationed Minds’, Idle Revival are going the right way about getting some attention. So often when I hear a Northern Irish accent singing, I cringe. That isn’t the case with Tom Tom’s (so good they named him twice)vocals here as he has no problem showcasing pieces of his accent. Characterised by melodious lead guitar and solid bass grooves, this EP is well worth a listen.

The opening track, ‘Trippin’ Over the World’, is brought to life by the blistering drumming of Barry McCone. The bass line, although basic, provides a platform for the other musicians to build off. The guitar driven melodies are at the forefront of this song. Idle Revival’s credentials as a traditional indie band are shown here but the other tracks on this EP show their versatility as artists and musicians.

Track two is similarly upbeat but packs more attitude than the former. William Hadden provides a powerful groove with his bass line in Better Self and adds to the slightly moody atmosphere. The lyrics speak of frustration at the temptations Tom Tom faces which keep him from being his ‘Better Self.’ This frustration is emphasised but the repetition of, “These temptations,” during the last part of the song.

For a description of track three look no further than the title; ‘Hostile’. The song begins with a drum beat that wouldn’t be out of place during some tribal ceremony. Shortly afterwards, the growling guitar riff kicks in. The thundering bass line packs the final punch in this song. We also see a softer edge to Tom’s vocals during the reflective verses of this track. These somewhat withdrawn verses are ideal to allow the powerful chorus to stand out. The bridge wouldn’t be lost as the intro for a Metallica song and I hope you have your air guitars at the ready for the solo!

Also included with this release are radio edits of ‘Trippin’ Over the World’ and ‘Hostile’. This is a smart move on the bands part as the tracks are a more radio friendly length and should increase their chance of some air time. The radio edits also make some subtle changes to the originals, beyond length, to make the tracks more attractive to the radio listening population who aren’t already hooked on Idle Revivals signature brand.