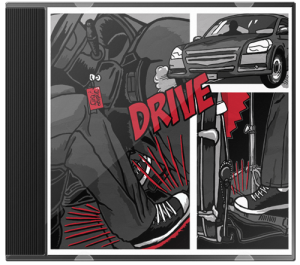 From the moment the intro fades and ‘Blood Red Butterfly’ kicks in you are bludgeoned with top-notch modern rock songs one after the other. ‘XVI’ comes next with its infectious lick and catchy vocal hooks. ‘Strange Day’ follows hard on its heels highlighting one of the band’s main strengths – Lavelle’s vocals, which are strong, versatile and tuneful. He sounds like Kelly Jones (Stereophonics) without the gravel and Lavelle can go higher into a register not unlike Vince Neill (Motley Crue) though, unlike Neill, Lavelle can actually sing.

The album continues apace with the punky ‘Sick of Emo’ (aren’t we all?) before the title track arrives with all its considerable weight. ‘More Often Than Not In The Rain’ has an intriguing title and a good riff, but unfortunately fails to live up to the promise and would be my one not-so-good moment on the album. But it doesn’t hang around long enough to spoil the party and gives way to the barroom brawl of ‘Not Today’, which I can imagine is a hoot live. ‘Set Me Free’ is a pleasant, if brief, change of mood.

The album effectively ends with ‘Radiosong’. Every band needs a song that heralds their presence, gets them on the radio and gets people asking ‘who’s that?’ ‘Radiosong’ is that song for Indigo Fury. It’s heavy enough with it’s main riff but commercial enough with a melodic guitar hook over the main riff and of course, Lavelle’s voice. This will be the song that will make people want to hear the album.

This is a great debut album; the quality of musicianship and production is top notch. Indigo Fury list Queens of the Stone Age as one of their main influences and this is evident throughout but, thankfully, they have only borrowed the best of Q.O.T.S.A. – the punchy, catchy parts and not the weirder,more eclectic and seedy aspects. There are other influences at work here that mean the band has not slavishly copying one style. Some of the angular riffing and rhythms on show are almost reminiscent of Arctic Monkeys or a less self-indulgent Muse, and in ‘Radiosong’ they have a Brit Rock anthem not a million miles removed from The Enemy. Their sound should have appeal on both sides of the Atlantic and if their is any justice in the world, Indigo Fury will go far and will have plenty more albums to further improve.