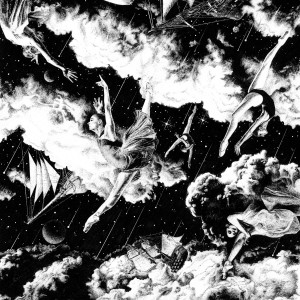 Folk has had a bit of a make over in the enchanting first EP from Marika Hackman,“That Iron Taste”. This seven track release got the helping hand of Alt J’s Charlie Andrew as producer, whose light touch propels the genre into the 21st Century.

With the opening bars of first track ‘Bath is Black’, you could assume this will be a cute venture into the mind of a pretty songstress. There is, after all, an abundance of autoharp, sticky synth patterns and  – consistently lovely – the case of Hackman’s voice. Yet the facade crumbles as we are shown the true origin of “that iron taste”. It is, of course, blood. Yep. Here and there are dotted dark images which lie in satisfying contrast with sweet layers of voice and percussion. Where contemporary folk artists would be crooning about unrequited love, Hackman (in ‘Cannibal’) serenely asks us “Have you seen my nose? I cut it off last night”. In ‘Borrow Time’ she sings of “hard bones” and “cracked blood”, slightly at odds with the drunken brass which stumbles through the verses. It’s in this same song that we can see, rolling into the dense syncopated guitars of the chorus, the subtle Alt J influence of producer Charlie Andrew.

There’s not much fat on the bones of this release, if you’ll pardon the pun. It spins well as a whole, but there is sharp contrast even within songs (between a capella and instrumental, acoustic or electronic) which verges on the bipolar. This is by no means a bad thing; Hackman’s uniformly matter-of-fact vocals tie the threads in place. Polite, non-emphatic and impartial, she regales us with stories of abuse, fear and self-harm with the least possible urgency. It’s especially prevalent in ‘Mountain Spine’; there are no histrionics and this is exactly where the charm lies. The harmonies of the a capella opening of ‘Plans’ could easily be heard in a church, in a sort of medieval plainchant way. If it sounds very wrong, don’t worry. It works.

The hypnotic ‘Retina Television’ again shows off Hackman’s fine voice with the addition of some unusual percussive instruments. No tambourines here: what we hear is the recorded sounds of Hackman slapping her legs and jumping about. Stacked up, slowed down, they’re almost unrecognizable but add a quality which makes this track a standout on the album (though they are all contenders!). The best is saved for last, with closing song and lead single “You Come Down”. Here, the simplest of vocals peel away from each other in a primitive and positively medieval fashion. It’s the perfect marriage of electronic samples and guitar, and probably the nearest to folk roots this EP gets.

“That Iron Taste” reveals a frail creature taking us through a shadowy world of her own invention. Those wanting more than this brief offering won’t need to hold their breath too long – she’s already making plans for a full length album. Don’t look now, but Marika Hackman will make vampires of the best of us.

◀ STANDOUT ⁞ You Come Down ▶
◀ SOUNDS LIKE ⁞ Laura Marling ▶

Nine Inch Nails are Back!