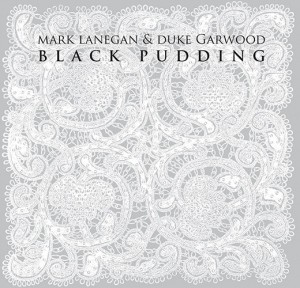 Mark Lanegan has had a long and varied music career, taking him from being at the forefront of Grunge with the excellent Screaming Trees, through several solo albums, to his invaluable stint with Q.O.T.S.A. and now is making a welcome habit of teaming up with artists from varying parts of the musical spectrum and putting together some very interesting albums. His latest collaboration with London-based multi-instrumentalist Duke Garwood, just might be his best yet.

Lanegan calls Garwood his ‘spiritual cousin from across the ocean’ and ‘Black Pudding’ definitely attests to a real ‘meeting of minds..and souls’. The two seem made for eachother. Garwood has been called the ‘London’s leading exponent of broke-down-blues’ and Lanegan’s rasping baritone being the modern equivalent to Tom Waits that it is, this is a match made in, I was going to say Heaven, but perhaps somewhere else (like ‘ at the crossroads’) is more apt.

It’s a difficult album to review in that, being as downbeat as it is, highlights are hard to pinpoint in terms of this song or that song. That’s not the point of a piece of work like this. This is an album that is a glorious example of what albums used to be like before this modern era of cherry-picking downloads etc. This is an album that has to be listened to in its entirety to be fully appreciated. It’s not a concept album, in fact it has more of a soundtrack feel to it. If someone told me it was the music to a Spaghetti Western I wouldn’t be surprised. With Garwood’s fine spanish guitar skills to the fore right from the start on the title track, we are immediately transported to another time and place, and the rest of the album keeps us there.

The lyrical themes on the album are, perhaps unsurprisingly, lost love, mortality and damnation but also, redemption. Lanegan is never one to hide his personal demons and he has had his fair share but with a song like ‘Pentecostal’ there are hints that he is in a better place. Then again, Lanegan doesn’t always dip from his own emotional well for inspiration. ‘War Memorial’ is written from a dying soldier’s point of view and again, it’s hard to avoid comparisons with Enyo Morricone and thoughts of  Blondie, Touco and Angel Eyes, stumbling through Civil War era America.

It’s not that the album has no variation, far from it. It’s not all Enyo Morricone with Tom Wait singing. ‘Sphinx’ is brighter with a lighter effect on Lanegan’s vocals, ‘Cold Molly’ is a Blues-Funk fusion with fuzzy Robby Krieger (The Doors) style electric guitar and melotron. But even with these subtle variations, the overall feel is ethereal Blues and what I can only describe as acoustic Grunge, because Lanegan has not fully abandoned the music of his youth, it is just packaged differently. It’s not hard to imagine the riff for ‘Mescalito’ or ‘Death Ride’  for instance, played on an electric guitar, everything turned up a notch or two. Even as they are they’d sit easily alongside something off ‘Sap’ by Alice In Chains or Nirvana ‘Unplugged’ in terms of feel.

Being the more high profile name out of the duo, perhaps it’s only to be expected that our focus tends to be on Lanegan. His vocals and songwriting are worthy of this focus, but it should not cause us to overlook Garwood’s contribution to ‘Black Pudding’. It is he, after all, who has created the musical canvas for Lanegan to paint his dark lyrical images, and has done so using a variety of instruments over and above acoustic guitar. It is telling of Lanegan’s respect for his co-conspirator that ‘Black Pudding’ begins and ends (‘Manchester Special’) with a guitar intrumental.

This isn’t going to be a commercial success, given the album’s nature, the lack of a signature track etc. There will also be a lot of listeners out there for whom this type of music just isn’t their idea of a good time. But there will also be a fair few, myself included, who love an album like this in our collection; an album not unlike Ray Lamontagne’s ‘When The Sun Turns Black’. There is a time and a place for such wonderfully melancholy music.