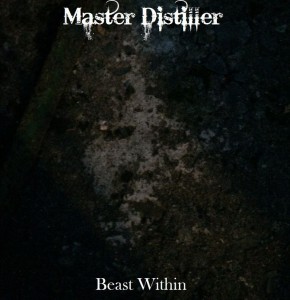 If you Google Master Distiller the results point more to a certain brand of bourbon whiskey than these newcomers to the NI rock scene. This is perhaps a deliberate ploy on the part of the band as the bio on their website (once you find it) proves to be somewhat vague – this is clearly a band for whom the phrase ‘shrouded in secrecy’ is particularly appropriate. What we do know is that there are just two band members, they joined Facebook and Twitter less than a year ago, and their debut EP ‘Beast Within’ was recorded in Newtownabbey’s Resonate Studios and released earlier this year.

The title track opens the EP with a rather creepy, ominous tone and urgent, clear vocals. The chorus is a real eye-opener with it’s powerful riffs and sinister lyrics (“you tried to tame the beast within!”). The song is quite quirky in a menacing way, particularly the ‘beast’ (ahem) of an instrumental break. If the band’s bio is true and there are indeed only two members of MD then they are a very impressive duo musically. ‘Seconds To Live’ follows next, with a ‘wub wub’ of bass and a swaggering riff that is part Sabbath, part sinuous Southern rock. It somehow manages the neat trick of sounding both insouciant and intense at the same time. This dual nature conjures up a mental picture of a rather grunge-y band playing in some dive, surrounded by bleary patrons and weary hookers. Again, the musicianship is terrific.

Final track ‘Six Shot Serenade’ is a rather epic number, clocking in at just under six minutes. It has a distinct ‘spaghetti Western’ feel, both musically and lyrically. For this ladies and gents is a story in a song, a tale of guns, good guys and bad guys and revenge. Such direct storytelling, with nothing in the way of metaphors or hidden meanings, is often an acquired taste, but in this case MD have created a song that is both simple and effective. True, the song is a tad too long and overstays its welcome by a minute or so, but aside from that tiny niggle the song is clever, cool and classy.

So, there you have it. Three distinctive songs, all played exceptionally well and all grabbing the listener’s attention for different reasons. Master Distiller, so new to the local scene, have released a rather unique EP right off the bat. Their sound is a heady combination of riffs, rock and grunge – a sort of ‘Sabbath meets Stone Sour meets Soundgarden’ kinda thing. The result is quirky, strong and rather reminiscent of fellow NI rockers The Rupture Dogs at their most chilled. The only pity is that the EP is so short, as a fourth song would have possibly helped to pinpoint the band’s signature sound in a way that these three songs haven’t quite managed to. Still, this is clearly a band that like to play their cards close to their chest. Perhaps even they haven’t decided on their ‘sound’ yet. If so, this EP is a mere taste of things to come – and a sweet taste it is, too. Definitely sweeter than bourbon anyway…

◀ STANDOUT ⁞ Beast Within ▶
◀ SOUNDS LIKE ⁞ The Rupture Dogs ▶