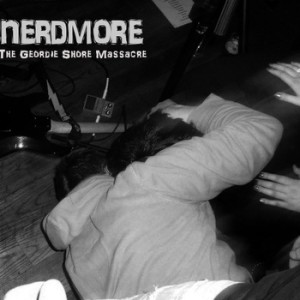 ‘The Geordie Shore Massacre’ is the first full-length album from Northern Irish pop-punk band Nerdmore. The band released an EP in April of this year titled ‘All My Dopes and Screams’, but their unquenchable thirst for writing new material has led to this vivacious and energetic album.

The Geordie Shore Massacre explodes into lively punk melodies and ferociously intense vocals in the album’s first track ‘The time I killed everyone in sight’. The track provides a sense of the liveliness and excitement that this album has to offer. Second track, ‘Tycoon’, aggressively gives an insight into the angst and anguish of living in the working class world, and entices a rebellion against all the difficulties standing in the way through the roaring crowd featured in the chorus. This track screams uprising, and resurrects an attitude and expression that has faded from music in recent years.

‘Bye she goes’ is a unique, bubble-grunge track antiqued by harmonics and modulations. The simplistic chorus and melancholic lyrics provide a classic twist on a tale of teenage heartbreak. The music modulates to add an element of cheesy-pop to the track, with a tone reminiscent of Weezer’s ‘Buddy Holly’.

Track four on the album, ‘Heart Lobotomy’, features Mick McGeehan who can be heard showcasing his vocals in practice before the song begins. A powerful introduction builds up a strong pop-punk atmosphere, and reiterates the rebellious undertones of the zombie lifestyle. The featured vocals of the chorus provide a rougher and harsher dimension to contrast the cleaner vocals of the verses. The song is stripped to skeletal form in the outro with distorted vocals and diminishing guitar chords which foreshadow the song fading to an end. ‘The Better Life’ plays the role of a fast-paced interlude, and bursts from the ashes of the previous track. Twisted vocals flourish against the violent guitar and hammering drums. A clipping of an American emergency television broadcast reflects the state of urgency and panic conveyed in this track. The broadcast is overthrown by a rampage of ferocity and the song ends with a cadence in the form of an explosion.

Sixth track from the album is titled ‘Dear Regret’. A slower, more emotional element of the album is apparent, with a chord progression evocative of Green Day’s ‘Good Riddance (Time of Your Life)’. Use of piano in the introduction and between verses helps to create a sensitive and vulnerable nature: a feature which is typically linked to pop music. The theme of nostalgic love, combined with the raw and beautifully imperfect vocals, results in a touchy and heart-wrenching ballad. The song ends with fading of overlapping sincere and manipulated vocals.

‘Forever’ begins with a quick drum-beat, followed by a detonation of punk guitar chords and spiky vocals singing Nerdmore’s interpretation of a party-anthem. This is a lively, quirky track that accurately brings to light a night of fun, love, and the feeling of invincibility. ‘Stay at Home and Drink Beer’ is a spiky, quick-fire tune which challenges the conventions of society with the nihilistic concept of spending all day drinking beer. A light-hearted instrumental epitomizes the light-hearted nature of this fun and bouncy song.

The penultimate track off the album is titled ‘My Name is Hercules’. An introduction comprised of mesmerizing tabs and chords on acoustic guitars gives the song a somewhat Eastern-vibe to the track that is undeniably beautiful. The song tells the story of Hercules: a man struggling with the repercussions of his fame behind closed doors. Downtrodden vocals empathise with Hercules’s demons and add a sympathetic tone to the undetected downfalls listed in the first person, such as cocaine addiction. Although the song is named after a Demigod, the apparent self-loathing of Hercules presents nothing more than a troubled human. The blame for Hercules’s condition is pointed at the human condition itself and the world’s warped priorities towards money. The song is stripped to a more raw and powerful tone with a plea of self-reflection.

‘Everyday is a Fucking Holiday’ is the perfect way to end this album. The song delves between the sharp guitar and bland vocals of the song itself, and what the band describe as “shit talk” and “even more shit talk”. This song provides an insight into Nerdmore’s chemistry as a band, as well as how much fun it must have been to record this album.
Nerdmore’s ‘The Geordie Shore Massacre’ is a brilliant album which puts a twist on pop-punk. This album truly shows that it only takes one good band to resurrect a dormant genre. Pop-punk’s not dead.