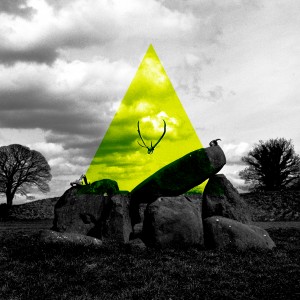 Sludge is such a beautiful word. Of course, it has many connotations. Some think of wading through mud during a particularly vapid festival and consider themselves a tough character because of it. Others think of changing oil in their cars. Different strokes and all that. To this reviewer, it’s the perfect description of the bastard children of punk and metal. Hence why it’s such a beautiful word.

On the go since June 2012, Nomadic Rituals have built up a fearsome reputation for slow and dirty riffs as well as punishing live experiences that boarder on sonic terrorism. They’ve even had members of Irish funeral doom merchants Wreck of the Hesperus eating out of their hands. That’s impressive.

The songs that make up ‘Holy Giants’ all appear on their 2012 demo (which the band hate, surprisingly). It’s a demo that can be used to illustrate the term “dirty” to anyone. With Niall Doran (Slomatics, Scimitar) at the mixing desk, it’s safe to say that ‘Holy Giants’ will be in safe hands. And you’d be right. Mirroring the demo, ‘Don’t Fuck With Giants’ kicks things off. When you feel (and hear) the feedback, the first thing that strikes you is how refined it is. Generally, feedback should sound like war (loud confusion that is ultimately very, very exciting). But the seventeen seconds of feedback before the drums come in act as a warning: abandon hope all ye who enter here. When the song begins properly, you’re transported into a world completely alien to your normal existence. One where slow and heaviness rules. And it’s beautiful. The four note riff dominates the proceedings and, played loud, sets a mood that is as gloomy as any Bukowski poem.

The most immediate difference between the demo and this album is Craig Carson’s vocals. On the demo, he had a voice that was strong, but pretty much in the mould of people like Mike Williams (Eyehategod) and Johnny Morrow (Iron Monkey). While all of this is still present, the echo makes him sound more inhuman. It’s perfect. Much like the song. At over eight minutes, it’s a punishing listen. But one that will blow you away if you allow the music to overtake you. As an opener,

‘The Grey’ is a more up tempo number which sadly lacks the killer bass into that is present on the demo but is still a killer number that has the head banging. ‘The Ritual’ is a stunning mix of differing tempos, feedback, riffage and noises familiar to those raised on prog and SPK records. If anything, the latter is maybe a little too low in the mix. But still a mind-blowing number.

Now we move onto the songs that are exclusive to this album. The title ‘Burning Planets’ conjures up images in the listener’s mind, and the music reflects this perfectly. Once again, a more up tempo song, but it’s used to give the feeling that time is running out. Around the three minute mark, the drums go into tribal mode. Occasionally, there’ll be a tap of a cymbal. A simple effect which gives the song a sinister feel and makes the bass sound even more powerful. A fine addition to the NR canon.

Closing with ‘An Accepted Human Condition’, the album ends on a slightly disappointing note. It is clearly a song that is designed for the live environment, and it is also one that would obliterate an audience within a three mile radius. On record, it feels strangely cramped and doesn’t flow the way it should. Even the closing feedback (which lasts for three minutes) doesn’t have the desired effect.

The artwork is beautiful. It invokes a feeling that this is the gateway to oblivion. The moment where humanity and nature collide in order to form a being that is more powerful than any god. Once again, it adds to the “abandon hope all ye who enter here” feeling of the album.

Being completely honest, this reviewer would probably find himself going back to the demo a bit more frequently than ‘Holy Giants.’ It’s for the simple reason that the demo is utterly filthy, while ‘Holy Giants’ is a little too clean at times. However, this is still an excellent debut by anyone’s standards.

Nomadic Rituals: another reason why sludge is such a beautiful word.