Over the Hill – Velvet Revolution

by Michelle Harris
in Music Reviews 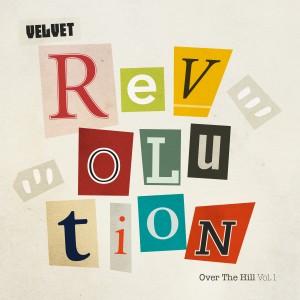 For most of us, we dread the day when we are told by our younger worldly companions that we are ‘over the hill’. But why should this expression be used to connote negativity? Well Over The Hill, a project made up of mature musicians, prove that you don’t have to be in your early 20s to have all the fun in music.

Founder of Over The Hill, Paul Kane, began working on ‘Velvet Revolution’ three years ago with producer Barrett Lahey of Start Together Studios. The collective, which began in 2011, is an outlet for older musicians to discuss the industry and perform their own music in a relaxed environment. For the album, 11 singer songwriters from the group’s 50 regular members were selected.

‘Velvet Revolution’ kicks off with a combination of Paul Kane’s vocals and acoustic guitar with Liz Kelly playing the violin on ‘Someone Else’s Dream’. This proves to be an inspired pairing as the music has a relaxing feel to it with an element of folk. The narrative of the song is one of love yet to be mutual. With lyrics such as “I’ve never felt like this before, even though I know the score” the song is relatable and almost feels as if it has been written for that purpose.

The album moves onto the bouncy, almost summery, ‘Jesus Is Gone’ by Bernard Jackson which is about exactly what the title suggests. It’s mostly guitar driven with some rag time piano thrown in during the chorus to match it’s cynical nature. And that’s not a criticism. In fact, the lyrics grabbed me straight away during the first listen, particularly the line “Being frightened is one thing. Being stupid is another.” It reminds me of some of the problems in our society right now but that’s another story.

For me, one of the stand out tracks on the album is ‘Everybody’s Smiling’. Every time I listen to this I have a picture in my head of a young woman almost floating through a dreary day wearing bright colours and a smile with love on her mind. Lyrically, the song is uplifting with naturally just a hint of worry. The backdrop of old time piano provided by Liz Kelly and expressive vocals of Kerry Quinn makes the song believable. The song makes me want to get up and sing along.

Another track which grabs my attention is ‘Not Your Business’ by Mandy Bingham with the help of her husband Graham. The lyrics describe heartbreak but with an almost bittersweet mixture of independence.

The rest of the songs on ‘Velvet Revolution’ flow naturally with each other from the slow guitar and hearty vocals of Rab Wishart in ‘Long Way Down’ and ‘Broscov Child’ by Neil Lavery to the overtones of Harry Nilsson in ‘Today’ by Gavin Duffy. We are greeted by the warm tones of Simon Murphy’s ‘Evergreen’ before moving on to ‘Romancing’ in which Alan Sheeran tells us the dreams of romance in the unlikely city of love, Belfast. The album concludes with ‘Sleep’, an energetic track with elements of traditional and the reflective yet optimistic ‘Spark’ by Kevin Mulligan.

Overall, ‘Velvet Revolution’ screams hard work, enjoyment and passion which makes it a pleasure to listen to. To create an album with various lyrical and musical styles which complement each other is not an easy task. However, the Over The Hill collective have managed it. So, who says being ‘Over The Hill’ is a bad thing?