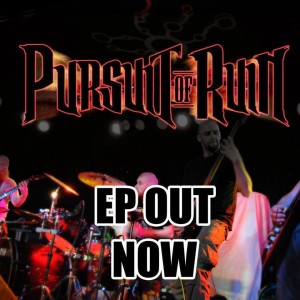 Derry/Donegal metallers Pursuit of Ruin were once known by the slightly less wholesome name ‘Balls Deep’. Hmm…good call on the name change, fellas! The band have been gigging and writing since their formation in 2007, and the fruits of their songwriting labours have recently been revealed with the release of their self-titled debut EP. For you ‘band trivia’ fans out there, the EP was produced by none other than Gacys Threads bassist extraordinaire Jonny Munro.

The band’s self-confessed love of “a wide range of metal genres” is immediately apparent upon listening to the EP. Opening track ‘Sickened’ is a metalcore song at it’s, ahem, core, but other influences such as hardcore, industrial and death metal are clearly audible in this snarling, roaring beast of a track. That this was one of the first songs penned by the band speaks volumes of their songwriting talents. ‘A Questionable Existence’ reveals another influence: old-school metal. It also showcases some rather impressive screams and growls from frontman Joey Jeckey. Track three, ‘Escape’, also has an old-school flavour, as well as a hefty dollop of death metal. Its gnarly guitar solo deserves special mention here. Fourth track ‘Mask Of All Fears’ is more of a pure metalcore number, although the subtle background riffs sound a bit like ‘Tallica’s ‘Sad But True’ cleverly woven into the fabric of the song.

Final song ‘Self Destruction Imminent’ clocks in at a rather astonishing eight minutes and forty-nine seconds. It’s acoustic ‘spaghetti western movie’ intro segues into quite a NWOBHM sounding number, with beefy guitars and aggressive riffs. It has to be said though, that this type of music doesn’t really lend itself to such lengthy output; the song tends to just chug along for much of the distance with little to break it up. The scary-screamy ending sounds oddly like an old episode of Doctor Who being played over the song. It’s quirky and different and they just about pull it off.

Song duration is a definite niggle here, as it creates an impression of a lack of editing/fat trimming during writing and recording. Metalcore songs tend to deliver a short sharp shock; yes, POR are fans of other metal genres but that doesn’t mean shoehorning every one of them into each song. A wee bit of ruthlessness wouldn’t go astray, and would hopefully ensure tighter, more disciplined songs. That said, POR are definitely an exciting prospect for the local metal scene. We may not get the ‘bawdy humour’ mileage out of their new moniker, but it certainly suits their brand of darkly alluring metal.