Rotten Royalty – At The Door 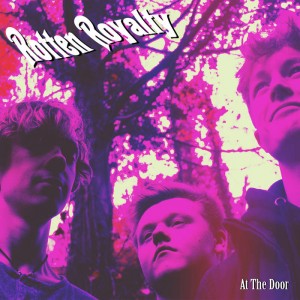 Who could have guessed that sounding like you’re from the late 60’s would become so utterly and necessarily refreshing. I have great admiration for the works of the Alex Turner’s and Miles Kane’s of the world and their insistence on talent over appearance, but its so invigorating to hear a new band that is so unapologetically in your face, and this is what Rotten Royalty has brought to the table. No funny business, no gimmicks or tricks, just pure unadulterated prehistoric sounding rock (in a good way). Let the show commence.

Aforementioned talent comes from Sam Morgan (on Guitar, vocals and occasionally keyboard), Jack Walsh (on Bass) and Richard Scott (Drums/Percussion), while a guest appearance from Robbie Marrs (Tenor Saxophone) rounds out the line up on this Punky and Psychic new EP “At The Door”. Groovy riffs abound and the accompaniment of snarling vocals and sludgy rock sound combine to give the group a sound that has not been exploited nearly enough in recent years. Returning to the roots of the Belfast Music scene, this hefty EP will appeal to all fans of anything 60/70’s related as the combination of psychedelia, blues, rock and punk creates an all to familiar and missed sound.

Opening track ‘Teenage Confusion’ has one of them slow building fire intros that give you chills before the songs opening riff. And on that note, oh my what a riff, it could blow the headphones out of your ears. A tune that wouldn’t sound out of place of ‘Good Vibrations’ single during Belfast’s troubled 70’s, the slow crescendoing intro contrasts perfectly with the snarling vocals of Morgan as he gnashes his way into your head, all vernacular and spit and fiery lyrics that emulate the tracks title. Lyrics that echo thoughts of rebellion, nights out, being broke and the mysterious “they” who seem to want “your babies” create a dark atmosphere that serves as a solid opening for the songs that follow.

‘Heavy Heart Woman’ harkens back to the olden days of psychedelic rock that they are always listening to in Vietnam war movies. A churning heart-attack riff opens up on what becomes an assault on the senses. Scott attacks his instruments as if they have committed a previous wrong doing upon him, while Morgan and Walsh combine thick bass lines and electrifying licks that you playing air guitar in record setting time (for myself anyway). However, while the musical prowess is evident in the instrumental aspect, the vocal department leaves something be desired, specifically the chorus. The chorus harmonies feel out of place among the faster pace of the verses, and while they don’t sound bad, they do sound alien in comparison. The lyrics themselves are more than adequate, as they tell the story of man pleading with some mate or other that his significant other is “a natural disaster”. The punky delivery of said lyrics compliment the fast paced invasion while constant  musical aptitude more than satisfies the listeners appetite.

‘Whiskey by the bottle’, the next song on the EP, provides the funkiest and sexiest tune as of yet. Thick, chunky bass lines prepare all listeners for imminent groove, while multicoloured guitar licks tickle the aural senses. While somewhat limited lyric wise, they get the job done and Morgan’s snarl does the tune a courtesy before the crescendoing climax of a hendrix-esque guitar solo bring this enjoyable number to a regretful close. Feedback aplenty is appreciated.

Fourth song, ‘Public Animal’ is the shortest number by far and, consequently, the most punk by far. A gracious mess of sleazy guitar, pounding drums and thumping bass has listeners exploring a primal and predatory landscape, punctuated by what could well have been celtic battle cries. A startling jump from the groovier sentimentalities of ‘Whiskey…’, the quickened pace and aggressive tones combine to give a gratifying 2-and-a-half minute headbanger that gives a glimpse of the energy that can be achieved in the coming future.

In direct juxtaposition to ‘Public…’ comes 8-minute ballad ‘Stone Cold’, which sounds like it crawled out of Thom Yorke’s attic. Haunting vocals and eerie acoustics open this track before the keyboard barrels its way to the forefront like a ghostly choir. Exploring the darker and more decrepit crypts of psychedelic rock, this track pushes your musical mind to it’s limits. The creepy and supernatural vibes continue until about the half way mark before Morgan, Walsh and Scott come screaming back to life with an aggressive, punky riff and beat reminiscent of some kind of Ramone/Sabbath love child. While the disturbing aura fades somewhat, the song remains downright scary to mere mortals, as the ominous bass track pounds away wile the hair-raising vocals and drums continue to intimidate. The unnerving aura returns for another minute before the final shocking climax as the group attacks both the audience and their instruments with frightening ferocity.

Rotten Royalty have shown that they know their instruments and their genre well, putting everything they’ve learned together in the final track to round of a successful and enjoyable EP. Fans of Black Sabbath and MC5 rejoice, your time is now.

Blazefest IV: All The Latest News