Ruairí and The Owls – Me Without You 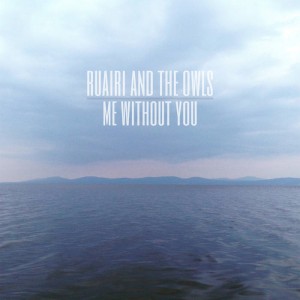 Ruairi and the Owls is a project by Derry singer-songwriter Ruairi Connolly, who recorded the three track ‘Me Without You’ EP with Peter Martin Doherty in Strabane’s Neon Noise Studios over the summer of 2015. Written during what Connolly described as ‘a stressful situation’, the EP is in fact a fairly upbeat collection of radio-ready folk-pop numbers.

The release’s opening track is a slick piece of gently rocking indie, ‘Force Field’. Connolly’s sweetly delivered heartfelt lyrics contain a distinctly Northern Irish flavour (‘drinking Buckfast alone on the wall’), that help carry the song’s upbeat mood. The choppy electric guitars in the song’s rocked-up chorus and the jaunty acoustic strums of the verses recall fellow Irishmen Kodaline and Snow Patrol’s arena singalongs to give ‘Me Without You’ a confident kick-off.

Next up is Lying Eyes, a collaboration with singer Jessica Doherty. The single, which has enjoyed support from Radio Ulster, thankfully foregoes the stadium country of its Eagles namesake and is instead reminiscent of the haunting electro of Chvrches. After Doherty’s opening verse, Connolly joins in to illustrate the two-sided tale of heartbreak, with his desperate confrontation of his lover’s infidelity being counteracted by Doherty’s soothing croon over the song’s shimmering beat. Connolly resignation in the song’s damning final lines (“stupid boys, stupid girls”) puts the blame for the relationship’s failure as much on himself, adding a refreshing maturity to the song’s climax.

The EP is rounded off with piano ballad ‘About Us’, where Connolly confesses his romantic shortcomings and begs for forgiveness. The nostalgic tone that runs throughout ‘Me Without You’ reaches its peak with this track, with the refrain ‘going back to yesterday’ reflecting Connolly’s attempt to sift through the sweeter memories of the failed relationship to both remember what they had and reflect on where the singer went wrong. If, as one would suspect, the ‘stressful situation’ in which the EP was written was indeed the breakdown of a relationship, the ‘Ruairi and the Owls’ project does seem to have helped its writer achieve catharsis and come to some real conclusions on both the incident and himself.

Despite the project’s comparisons to a host of legendary alt. miserablists, from Neil Young and Elliott Smith to the Smashing Pumpkins, ‘Me Without You’ is far from the challenging listen that the aforementioned artists’ most sombre works are: instead, it’s a pleasant three song outing for a troubadour with his heart on his sleeve and ear for crowd pleasing melodies.