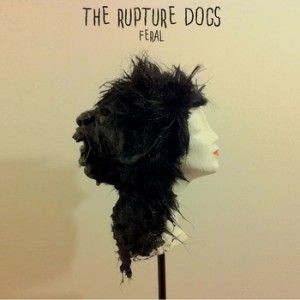 Since McCreevy brothers Allan and Gareth formed The Rupture Dogs in 2008 they have released a reliably steady stream of EP’s, including ‘Live in Dundee’ which brilliantly showcased their incendiary live performances. Clearly the creative (and financial) gods have smiled on the band as they released a full-length album, entitled ‘feral’, in October 2013. With the recent addition of Dave Hanna on guitar, the brothers McCreevy, along with bassist Terry McHugh, have become a four-piece; a decision that has undoubtedly enriched their grungey, alternative sound.

First track ‘Burn’ kicks things off nicely, with its menacing tone and some impressive screamed vocals. As short as it is (around two and a half minutes), it’s something of a genre-straddler: indie rock verses, hard rock choruses. Track two ‘Eye For An Eye’ also exhibits this split personality; it starts off all Arctic Monkeys before veering off into what one might call ‘safe’ rock. More Kerrang! Than Scuzz, if you will. Then, just when you think you have this band pegged, they pull out all of the stops for an impressively unhinged, howling flourish to end the track.

The band flirt with several  genres throughout the album. ‘Love Song’ is pure indie-pop, with a steely rock spine and a great line in bitter, ‘fuck love’ lyrics (“I don’t wanna hear that love song!”). ‘Before the Flood’ touches on Eighties electronica with a Gary Numan-esque vibe. Then there’s ‘Fist’, with its punk intro, catchy beat and exasperated lyrics: “Will you ever just listen?! No?!” The lads even rather artfully touch upon the political situation in the Province with ‘The Problem’. “I gotta problem with hatred, I just get cold feet”, spits McCreevy wearily over a quite grungey track, complete with gnarly guitar solo. The entire album, essentially, is packed full of well-crafted songs, outstanding musicianship and some seriously kick-ass vocals (Mr. McCreevy has a rather tasty roar!). If there is one weakness, it’s that the schizophrenic nature of the songs can sometimes render them a bit too tentative. This can be most clearly heard on ‘Joe’, which is a bit saccharine and ‘meh’.

However, that small niggle is well compensated by the standard of the album as a whole. There are two tracks in particular that stand out, the first being the ominous, Seventies horror rock-esque ‘Nightmare’, with its glorious bassline and quite manic vocals, where McCreevy has really gone for it. The other is the last song, ‘Painted On Skin’. It starts with a slow, quirky intro before pausing for effect and then: HUGE riffs! The song then blasts off with its clever time signatures, disdainfully tragic lyrics and the best drumming on the album. In fact, this is the highlight of the album because it simply dances to its own beat and revels in its uniqueness. It demonstrates, more than any other track, the band’s willingness to think ‘outside the box’. The vocals are also excellent, with McCreevy’s different singing styles showcased without ever becoming too clever or overwhelming. A long, chaotic outro wraps up the song, and the album, with a discordant bang.

The Rupture Dogs’ first ‘proper’ album is a bit of a mixed bag of sweeties. At times indie, at times hard rock (often within a few bars of each other), it is a bit of a fence-sitter musically. Sometimes this approach works (such as in ‘Nightmare’), sometimes not so much (‘Joe’). The band are clearly growing as songwriters, which is always exciting to witness, and on ‘feral’ they have also demonstrated their keenness to craft not only good songs, but interesting ones. With plaudits flooding in for the album and no doubt many tour dates to promote it, 2014 is already shaping up to be ‘the year of the dogs’.