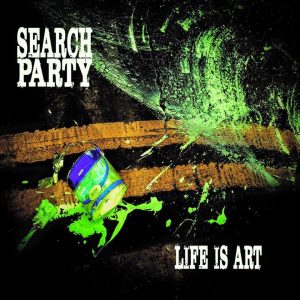 It’s been a long road for Search Party. After forming in 2013, they’ve gone through a sizeable turn around in members, particularly in the bass department, and gigged furiously around the country before finally settling into their now established line up of Sean McDonnell, Dee Malone, Ethan Murphy and Ryan Pendelton. An EP was soon to follow and they were sure to deliver.

Opening with “Contrapuntal paradox” establishes the punk rock ethos that carries on throughout the rest of the EP. Fast paced, aggressive guitar prevails as the group take on a pseudo-Foo Fighters approach, thrashing away with reckless abandon it a somewhat controlled manner. Boisterous drumming permeates the air waves as frazzled, spark plug guitar licks lash away at listeners, before ending on a solid note as the band begins their recorded journey.

Next song “Life is art” manages to improve still, with a much more modern vibe pushing the tempo to break neck pace. The post grunge vibe continues, spreading the darker undertones insidiously closer to the heart of the music, with a clever use of spoken word speech weaved throughout creating an atmosphere of gloom. For as first time production, it is remarkably professional. The acoustics are clear and sharp as a bell, while the normally undercut bass is ever present, like a pressure cooker in the background of the music landscape. The effect is that of controlled chaos, as the band rollick around like a bag of cats. This is a surely a result of there being together since 2013, which has only worked to improve the chemistry between members.

The modern sensibilities keep the tune fresh and sanguine as the riffs and licks ricochet around your head, creating the ideal surrounding for a radio rock song. Subtly intimidating and smart with combative percussion, this is surely the crown jewel of the EP. Following immediately is song number three,“Coming alive” which does not have the same draw as “Life is…” but is still a great song in its own right. A much groovier opening comes forth following a thick bass line that hits you in the jaw like a sucker punch. What follows immediately is simply pure bred punk rock, an uncomplicated and uncompromising offensive with noticeable similarities to Sex Pistols before an intrusive and threatening crescendo brings everything down around your ears. Obstinate in its goal as ever: a simple, nose-to-grindstone rock number.

Finally come song number four, “Place to be” which continues down the same path as the following three songs. No artsy intro’s or indie meddling, just honest, hardworking, authentic Belfast rock, in the vein of bands such as “Rudi” and “The Outcasts”. The modern sound with punk sensibilities allowed ‘Search Party’ to create a prudent identity which they stick to, creating a familiar sound that appeals to a wide variety of listeners. A solid first effort with signs of obvious potential.