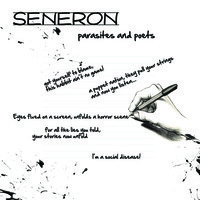 I always admire bands that put their money where their mouths are. For most bands releasing an album is the goal they hope a record company will help them achieve, and so we get unsigned bands ‘releasing’ a continuous stream of ‘singles’ and E.P.s charting their progress. Nothing wrong with that – it is not a lot different from the old-fashioned demo route bands used to take back when I had stars in my own eyes. But, as I said, I have an automatic respect for any band who organises finances etc to record an album and who backs their ability to hold the attention of the listener for more than that one song or a four song E.P. So, hats off immediately to Derry’s Seneron, without even listening to ‘Parasites & Poets’!

But, thankfully, listening to ‘Parasites & Poets’ does not dull my admiration for what Seneron have achieved. It is a strong body of work from a band who have clearly matured, clearly improved with age by identifying weak areas and taking the necessary steps to get better. They have improved the overall strength of each song from previous releases, John Shield’s vocals have much more texture and dimension to them than on previous releases, and there is a real cogency about the album. In short, the time was right for Seneron to do this, to show their strengths.

Other than the band itself, the other star of the show is the production, unsurprising perhaps, given that it was recorded in Manor Park Studios, whose output is always top quality. The production certainly captures all the punch of those guitar riffs and drum accents while, as I say, never losing the vocals in the mix or downplaying their importance to the overall sound. It would be easy to make Seneron all about the riffs, because they really do a great job in trying to corner the market on modern guitar riffs. It really is 8 songs of relentless guitar riff assault. That is the band’s strength and they are right to play on it, but well done to Manor Park for making sure the whole package is intact.

There are no weak songs on the album, albeit a shortish album, weighing in at under 30 minutes for the 8 songs. Album opener and first single from the album, ‘Don’t Cave In’, was a strong/logical choice. At no time do you get the feeling that weaker songs are being tucked in here or there. I can imagine listeners having their own favourites for their own reasons. What I would say though is that although I don’t hear any weak songs on the album, for me there was no real standout song either. I like all the songs, enjoyed the album on repeated listens, especially musically, but there just aren’t those one or two songs that I totally fell in love with.

I have likened Seneron to early Foo Fighters in terms of style, but like em or loathe em, despite each of their albums having their fair share of ‘filler’, The Foo’s always manage to pen those one or two ‘instant-favourite’ songs per album. I don’t think Seneron have quite managed that. I think I’d have to put it down, not to the vocals so much, moreso the melodies. Yes, melody is perhaps a strange term for what the singer has to sing over riffs as heavy as ‘Dig Deep’, but for want of a better word ‘melody’ will have to do and I feel that this is one area the band could improve if they really want to take another step up. Another reason is that across the 8 songs there is little variation in tempo or feel so that as you listen on repeat each song may be identifiable by the chorus, but overall effect is that of being a tad ‘samey’.

Seneron have come out and pinned their colours to the mast and said ‘this is who we are’ and I appreciate that it is justifiable that they should do so, I don’t argue with their strategy one iota. But perhaps, had the album been 10 songs long with 2 of those songs having just a bit of a different feel, tempo or texture, it might have had the effect of giving the album that bit more depth. But all in all, well done guys and there are many out there who will just want to rock out to half an hour of breakneck riffing. If so, Seneron are your men!