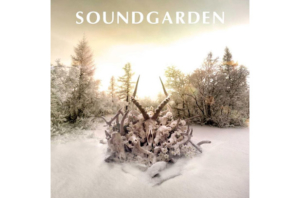 The first song on ‘King Animal’ says it all. Soundgarden HAVE ‘Been Away Too Long’. One of the four great bands of Seattle’s 90’s explosion along with Nirvana, Pearl Jam and Alice in Chains are well and truly back with their 5th studio album. Cornell’s solo album ‘Euphoria Morning’ was a very fine study of acoustic-based melancholia and Audioslave filled the gap left by Soundgarden and Rage Against The Machine.  But when a band was as good as Soundgarden were on their classic albums Badmotorfinger and Superunknown, then it’s hard for those of us who grew up listening to them not to hanker for Cornell, Thayil, Shepherd & Cameron to get in a room and bang out some detuned toons.

That is exactly what happened, thanks to the release of their greatest hits album ‘Telephantasm’ in 2010 and the subsequent tour, and ‘King Animal’ is the result. In many ways it’s reminiscent to ‘Superunknown’, more so than their last studio album, ‘Down on the Upside’, in that songs with very different feels sit beside one another with no apparent conflict. The basis is, of course, the detuned Sabbath-esque riffing of  Kim Thayil backed up by the tight-ass rhythm section of Ben Shepherd & Matt Cameron, topped off with one of THE best voices in Rock history – Chris Cornell. All the elements are here for a Soundgarden release. Yes there are the riff-fests but as ever there are some punkier moments (‘Attrition’), some eastern-influenced moments (‘A Thousand Days Before’), some weird moments (‘Rowing’) and some melodic moments (‘Halfway There’). The highlights for me are ‘Blood On The Valley Floor’ and ‘Worse Dreams’, which features riffs and melodies that are the epitome of the type of Alternative Rock that the world named ‘Grunge’.

It’s a welcome return and a good album, without; it has to be said, ever truly matching the jaw-dropping intensity and consistency of ‘Badmotorfinger’ or the individual brilliance of the best songs on ‘Superunknown’. I feel there aren’t songs on this album that reach the heights of ‘Rusty Cage’, ‘Outshined’ etc from ‘Badmotorfinger’ or ‘Fell on Black Days’, ‘Like Suicide’ etc from ‘Superunknown’ and that’s the bottom line. The sound is there; the feel is there (if a little arthritic perhaps), just not the songs that match past ventures. But it still pisses over most of the new Rock out there and has so many more textures and much more depth than your average Heavy Rock record, so it’s still well worth any serious Rock fan’s hard-earned cash. I hope it does well enough to keep the band together and it wouldn’t surprise me if more time in the saddle together produces more classic SG songs. If you haven’t heard Soundgarden before or maybe only ‘Black Hole Sun’ then this is a fine introduction, but go out and buy those great 1990’s albums as well.