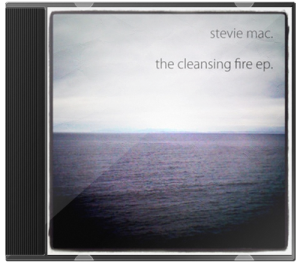 Stevie Mac has yet to release a full album and we have to wonder why since the quality of the songwriting and musical production in this EP suggest an album surely has to be forthcoming. The music on display here is hugely different from Mac’s pop venture ‘Uber Glitterati’ so if you’re expecting 80’s electro-pop chances are these are not the droids you are looking for.

‘The Cleansing Fire’ features powerful and heavy drums. The clever use of cymbals crashing in perfect harmony with Stevie’s vocals is a nice touch. Stevie’s voice is reminiscent of Marcus Mumford, Noel Gallagher and at times Phil Collins, Stevie’s voice has a gravelly, scratchy voice that is powerful, emotive and clear.

‘Horse of Troy’ highlights Mac’s musical proficiency with a track that is nothing short of epic. It is well crafted and it’s simplicity at its best. The song is well layered with sparse drums and meandering riffs that, coupled with Mac’s heartfelt vocals present us with the standout of an EP littered with great songs.

‘Fast and Slow’ is another fine example of Mac’s ability with regards to producing a strong record without a massive backing. There are only drums and guitar on display here and to be honest when it comes to folk-rock, that’s all you ever need.

‘Leave My Heart Alone’ finishes the EP with a crackled stripped down song that reminds us that while instrumentally Stevie Mac knows how to create a record, his voice is the shining light throughout and this last track does exactly that.

All in all it’s a shame we only have four tracks to listen to but if an album is due then this will have turned out to be the most minor of complaints! A really lovely, charming record that just goes to show that you don’t always need massive production values to produce a few great songs.