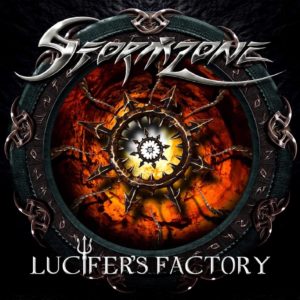 I’m into sport and it may have become a cliché, but it does not make it any less true, that momentum plays a big part in deciding winners and losers in sport, especially team sports. A run of confidence-inducing results can sweep an average team like Leicester to the title, a run of bad results can even sap a good team of confidence and see them relegated. I think the same can be said for success or failure (or lack of success) in the music industry. Momentum is key. Harness it and you can go a long way, lose it and it can be a long, hard slog to get it back.

Without having what would be called stellar success, Stormzone had slowly but surely been establishing its credentials, locally and further afield, pretty much from the moment the project ditched the more mainstream Heavy Rock of its debut album, ‘Caught in the Act’, for a decidedly more Power Metal direction a la Maiden / Priest/ Queensryche / Helloween. Quality Metal releases followed: ‘Death Dealer’, ‘Zero to Rage’, ‘Three Kings’, all seemed to refine and perfect the band’s sound and song-writing capabilities. The band weren’t afraid to ‘be Metal’, with traditional Metal song subjects (war, history, myth, horror and Metal itself) to the fore. Each album was building a slow but seemingly inexorable momentum that made the band the biggest local live draw and getting plenty of work overseas. In this writer’s view, their last album, ‘Seven Sins’, should have been the band’s ‘Number of the Beast’/’Operation: Mindcrime’ i.e. the album that distilled all the band’s good points into one batch of songs. I thought it was a contemporary masterpiece –  I still do. It had everything going for it. It just needed that music biz momentum of great reviews, successful gigs, and PR, PR, PR.

Sadly though, for reasons I won’t speculate on or criticise, instead of gaining momentum, momentum seemed to be lost almost from the off. The album launch didn’t go as planned (and let me tell you, this is a band that plans), there seemed a lack of direction as to who was in the band permanently, promotion via video started very well then seemed to stop, and the band seemed to go off radar for a while in terms of live work. Harv (vocals) even got his hair cut for goodness sake! Momentum was indeed lost (and no, I am not blaming the haircut) and I was worried that the band would struggle to regain that momentum, maybe even fail to regain its place in the local Hard Rock/Metal hierarchy, nevermind its wider audience.

Oh me of little faith. I should have known that Harv and the lads would just get on with it and do what they do best – putting together quality Heavy Metal songs. And with ‘Lucifer’s Factory’  they have done it again. They have released another collection of songs firmly under the main umbrella of Heavy Metal, but with a nod to more than one sub-genre, such as the touches of Germanic/Nordic Symphonic Metal of album opener and lead off single (see video) ‘Dark Hedges’, the Celtic-rock of ‘Cushy Glen’, the (Master of Puppets era Metallica) thrash of ‘Albhartach’ to point out just three. And by the way, did any of you get the local references of the three songs I just mentioned? Ok, I won’t pretend I am clever, I had to Google two of them. This is another staple of Harv’s lyrics, writing about local myths and history. I love that about the band, that they are not ashamed about who or what they or where they come from . They don’t try to change what they are to chase trends.

Like any band with several (quality) albums behind them, ‘Lucifer’s Factory’ isn’t going to cause too many shocks in terms of style to existing fans – indeed, without calling the band repetitive, there are echos of previous releases in some of the material. But there are also a few little departures. There will be songs some like more than others, that’s only natural. Some will have that lasting appeal that eventually will see them as must-haves in any future live set. My guess would be ‘Broken Window’ and the title song will both stick around in the live set for a good while. ‘Lucifer’s Factory’ features the wondrous combination of a brutal main riff and a soaring chorus. Few bands can do this – combine the brutal with the melodic and make it all so natural. The one main surprise or departure for the band would be album closer, ‘Time To Go’, which is a ballad of sorts. It’s not that the band hasn’t shown a softer side in the past – ‘Beware In Time’ (from ‘Three Kings’) showed exactly that, especially the acoustic version they released. ‘Time To Go’ is a fantastic song, featuring again Harv’s impressive vocal range and just feels right as it closes the album. But those are just my favourites, there are quality tunes aplenty and others will have their favourites.

Special mention must go to Steve Moore, who is more than just the mainstay guitarist in the band, but also sound engineer and producer in his Fireland Studio. Over and above his superb playing, once again the production is top notch, with plenty of punch and touches that hold the interest but without going too over the top and making you think the music is all studio wizardry. That’s a very difficult line to tread with the use of technology to shortcut the recording process being so seductive.

So. Bottom line is – Stormzone is back and back with a bang. The line up seems solidified. The product is there. The ‘merch’ is there. The positive reviews coming back from across the Metal world are there. The gigs are building in number and size. Harv’s hair is also back (coincidence?) I hope and trust that ‘Lucifer’s Factory’ will get the SZ Bandwagon rolling once again. If there is any justice, it will.

Sunflowerfest Returns For 2018 with One Earth Theme