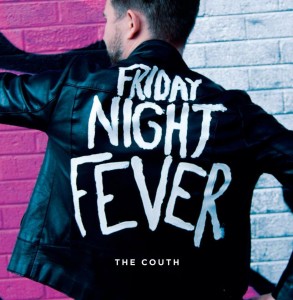 Lisburn guitar slingers The Couth have been critical darlings in the Northern Ireland music scene since the realease of their 2012 EP ‘Casual Sex At The Omniplex’, a position only strengthened by the release of last year’s Bloodbreaker EP, which saw them expand the exuberant pop-punk of their debut realease with a heavier, more melodic sound. New EP ‘Friday Night Fever’ see the David McCrum-fronted outfit confirm their position as master craftsmen of fast-paced, hook-laden good time rock ‘n’ roll.

Opener ’45 Seconds’ kicks things off in typically breakneck fashion, with pummelling Ramones style riffage from guitarists McCrum and Ryan Stanfield, with the energetic rhythm section of Matthew McCrum and drummer Kyle Irwin supplying a bouncing backbeat. David sneers ‘You gotta let go’ in a snotty drawl that recalls a young Billy-Joe Armstrong, and the track evokes the punk legends carefree glory years, and follows in the fine sing along opening cuts of their previous two releases, ‘Suck My Honey’ and ‘Bloodbreaker’ in what is fast becoming a signature sound for the band.

The intro to ‘Pretty Lady’ is a rumbling bass riff from Matthew McCrum that sounds like it could have been lifted from the Strokes debut ‘Is This It’ before growing into a pop punk melody that couldn’t sound more at home on the Warped Tour if it was wearing three quarter length shorts with a wallet-chain attached. The Couth’s appreciation of the ‘golden era’ of pop punk but with more muscular guitars is reminiscent of LA’s finest FIDLAR, and their fans will love the devil-may-care attitudes of the Lisburn lads on this track.

The Couth stretch themselves stylistically on last song ‘Wild Notion’, which sees them adopt a slower, classic rock influenced rhythm in the verses. McCrum’s cocky delivery over the garagey racket sounds like it was lifted from The Strypes indie influenced sophomore record, or from fellow mod-suited garage heroes The Hives. The band reaches full flight as they build up to the song’s thrashy punk chorus (‘Wild wild notion just to pass the time/ wild wild notion I just can’t leave behind’), and finding room for the gloriously sleazy Stooges-esque guitar solos from Stanfield that propel the tune into an MC5 level of noisy nirvana.

The Couth deliver yet again with another set of irresistible pop-punk anthems that would proudly sit among the finest punk tunes to have come out of Northern Ireland’s proud musical heritage. Surely a debut full-length album beckons, and with press support, good humour and song writing chops to burn, there is no reason why their album would not stand proudly alongside the Ulster punk debuts of scene legends Ash, Stiff Little Fingers and the Undertones. In the meantime this outstanding EP will have to do, and should be the soundtrack to Friday nights throughout the country.