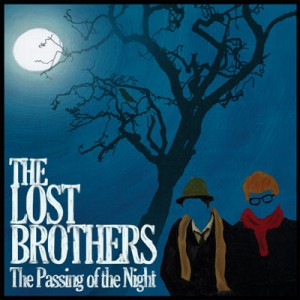 The Lost Brothers aren’t even brothers, but we can forgive them that little porkie in light of their charming third studio album, The Passing of the Night. Since their formation in 2007, the duo has been presenting us with their unique blend of folk and blues. Produced by Brendan Benson, their latest offering is nothing short of a venture in melody, topped with a battered cloth cap and a whisky on the side.

The inspiration for this album is rooted deep in American rhythm and blues, bluegrass and folk. We’re transported from the very first song, ‘Not Now Warden’, to the band’s own jailhouse of heartache and misfortune. An array of instruments from violins to steel guitars (and something which sounds suspiciously like a musical saw) is just one of the aspects that lead us away from the present day. It’s this sense of escapism that characterises the album as a whole, reflecting the trend of nostalgia that is becoming ever popular in recentmusic.

Each song in this album embraces a distinct style, yet The Lost Brothers inimitable sound keeps it all tied together nicely. ‘Bird in a Cage’ and 1950s cover song ‘Hey Miss Fannie’ shake things up a bit with a loose skiffle beat and saloon style piano. ‘Farside’, on the other hand, takes the listener on a boozy waltz to “nowhere at all”. The flow of the songs is perfectly balanced thanks to a well executed running order.

‘Now That The Night Has Come’ and ‘Blue Moon in September’ stand out as prime examples of the well-crafted song writing style The Lost Brothers have honed. The warmth of their vocals and closeness of the harmonies are most apparent in these songs, as is their folk influences. Emphasis is placed on melody, not only in the voice but in solo instruments too.

It’s not difficult to hear where this album got its title from. Almost every song seems to have been borne of that listless feeling which can only be experienced after midnight. Halfway in, ‘Widowmaker’ deals with the sinister subject of the gallows – made all the more eerie by the distorted melody echoed in the violin. “Until The Morning” drifts the album to a close, in a wash of pedal steel guitar.

This release depicts the passing of the night in more ways than one, gently guiding the listener through a series of heartfelt tales. Though very much steeped in times gone by, The Lost Brothers’ themes are ever relevant to listeners today. It’s not exactly groundbreaking but it’s familiar in a friendly, comforting way. Like a less hyper Mumford and Sons, they certainly aren’t afraid of a banjo and we salute them for it.

◀ STANDOUT ⁞ Now That the Night Has Come ▶
◀ SOUNDS LIKE ⁞ Mumford & Sons ▶