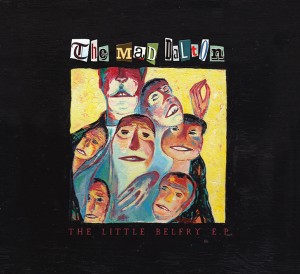 As the technological focus of modernity holds a claustrophobic grip on us all, The Mad Dalton offers an EP absolutely loaded with passionate, heavily atmospheric tracks that take the time to slow down and think about contemporary times. This jazz inspired alternative rock E.P begins on a sombre note, with opening track ‘Cloak and Dagger’ sporting a melancholic guitar and brass section that wouldn’t sound amiss in a Sergio Leone spaghetti western. All aspects are on point here, from the empathetic lyrics to the lonesome whistling, the song builds an atmosphere of sitting in the smokiest of local pubs.

Following this comes the titular track ‘The Little Belfry’, introduced by the smooth and articulate drumming of Niall Quinn. The song features an enticing main riff which is sure to be stuck in your head for some time to come, and the dejected, bourbon infused lyrics aid in crafting a delicate bar room aesthetic. The EP shifts gears in the middle, as the third track ‘Drunkard’s Dream’ carries itself with an uplifting tone and drowsy slide guitar. Peter GW Sumadh proves himself to a very competent guitarist and singer here, reaching lofty harmonies and subtle chord progressions with relative ease.

The second to last song on the EP, titled ‘Madge’ returns to the melancholic atmosphere set by earlier tracks, but with an electronic twist which I personally appreciate very much. The slight use of effects on vocals and lead guitar, the synth background, and the powerful female vocals courtesy of Claire McCartney help this track gain its own identity among the other songs. The song fits comfortably within the lounge music sound-scape of the earlier offerings, while also standing firmly on its own. The same cannot be said final song, ‘Farwell (Boy at the Station)’, which features a reprise on the riff found on the second track. Unfortunately, this does cause a lot of the EP to blend together on repeat listening, where a more original offering would have left a deeper impression.

The Mad Dalton have offered a captivating debut record that is sure to satisfy anyone with a craving for decent alternative folk music, as each featured musician offers great talent and charisma to the recording. However, at times it can feel like it re-treading its own ground, and it leaves me desiring the same amount of focus and passion put into something a bit more adventurous. All eyes should be on this group for their next release.