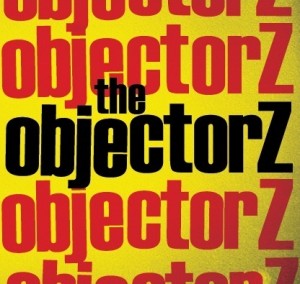 Descriptions like “Status Quo playing punk” warm the cockles of my heart. Not only is it amusing to imagine the denim clad boogie merchants trying to get to grips with playing Adverts numbers, but it also implies an attempt to thumb their noses at convention.

The Objectorz are something of a Dublin super group. Made up of members of Zom, Wizards of Firetop Mountains and Moutpiece, they play fierce garage rock with more than a hint of Leatherface and the delivery of the MC5. This cassette came out last year, but it’s never too late to learn about great music, now is it?

Blasting in with a Rudiesque opening riff, ‘One Way Conversation’ immediately sets the tone: rough, ready and yet beautifully melodic guitar riffs and vocals that straddle a fine line between gruff and heartfelt pathos without descending into clichéd crap. Think ‘Mush’ era Leatherface and you’re on the right path.

‘It’s 10 O Clock’ rocks like a bastard, while ‘Can’t Sit Still’ could have come off the most recent UK Subs album with it’s garage licks and frantic chords. It could also be about having piles: “what you gonna do about it/Can’t sit still!” Absolutely killer solo thrown in as well. Hands down, the best track on here.

‘Say it Now’ starts with the choppy guitar work reminiscent of Wilko Johnson era Dr. Feelgood, but a million times faster. It’s a sign of how good the song is when you don’t notice that the middle eight is just the main riff repeated over and over. The sort of song you stick on the stereo when heading to an eagerly awaited gig.

What you get with ‘Demonstration’ is no frills, straight ahead garage rock. A million miles removed from what passes for garage rock these days, there is passion and excitement dripping throughout this EP.

Fuck Status Quo. This cannot be recommended highly enough. The Objectorz all the way.

Does ‘selling out’ turn you off?