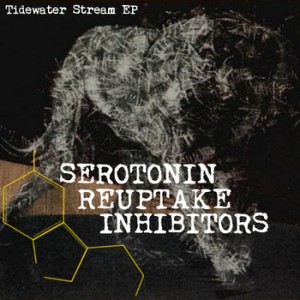 There is nothing worse that catching a band whose recorded music you love to only discover it’s been so heavily preened that it can never be captured in all its glory live. Thankfully from the ashes of Nijinsky rises Serotonin Reuptake Inhibitors (SRI), a band not interested in creating “perfectly polished, well constructed radio-ready music.”

There is always the danger that without bringing in an experienced producer, a DIY release can sound a bit flat and lack that certain magic. SRI have managed to skate over that thin ice with a driving rhythm section that exhibits a refreshing directness. ‘workbuyconsumedie’ puts in quite a shift delving into a murky mire of grunge, whilst closer ‘governmother’ steals more in the direction of classic hard rock territory; in its essence taking no prisoners.

With the three track EP having no song over 2 minutes 40 seconds you would be forgiven for questioning whether they fit under the punk mold. Lyrical references to “bowing to the state” and “The state isn’t God, the state is a noose” add to that typical anti-establishment punk notion. The reality though is that this record is more a dalliance in punk but should be classed as raw grungy rock.

One thing you can be sure of this record will translate well in a live setting.

Euro 2022: Searching For An Anthem