Trucker Diablo – Fighting For Everything 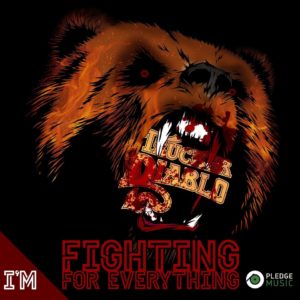 I am not surprised, and you will not be surprised to read, that Trucker Diablo have released another good album, to follow the three before it, two of which I have reviewed for CB and rightly gave them the Al G seal of approval. In addition, I must’ve seen Trucker a dozen times live and they never fail to deliver a rousing performance of high octane, fuel-injected Heavy Rock. ‘Fighting For Everything’ was funded by a pledge campaign. That this campaign reached its target pretty swiftly is no surprise either – fans know they won’t be short-changed. I pledged too as it happens (yes, a Ballymena man paying for something in advance!!) and when the email arrived to say the album was available for download, I downloaded it in the full knowledge that it would be good. I downloaded it knowing that any subsequent review I did wouldn’t be too difficult. I’d do my (too long) introduction. I’d give the back-story of the band, but Trucker are Trucker and they do what they have always done. I’d maybe give it a big ‘will it be any good’ build up. I’d answer my own question (eventually). I’d take you through the songs. I’d tell you my favourites. I’d talk about the performances, the production etc. I’d maybe point out a few ‘could do betters’ or maybe you’d guess which songs I didn’t like, because I didn’t list them – damned by omission as it were.But here is the surprise – ‘Fighting For Everything’ by Trucker Diablo is not a good album, it is not a very good album, it’s not even an excellent album. ‘Fighting for Everything’ by Trucker Diablo is a stunning album, a phenomenal album, a solid-gold, stone-cold classic for its genre. And here is the other surprise, this will be a short(ish) review. No, really. Surely, Mr Gilmore will want to wax lyrical over several lengthy paragraphs about it? No. Why not? Ok, here’s why.

Paragraph about songs that are ok but are maybe a bit of filler for an otherwise tasty sandwich. [File Not Found].

Paragraph about the production. It’s Franky McClay at Einstein Studios. ‘Nuff Said. McClay always gets the best out of his charges. He knows how to capture each band, take what they have and sprinkle it with a little Einstein star-dust. The sound is, chunky, fat and perfect. He’s done it again.

Paragraph about performances. The band is rock solid , as you would expect from four guys who have been around the block, know their craft and trust eachother. Again, McClay’s production allows everyone to shine, right down to Jim McGurk’s lovely bass-run at the end of ‘Let’s Just Ride’. Terry Crawford’s drumming is rock solid, his kit just booms! The dual rhythm guitars are balls-out (as promised by Simon Haddock in an interview I did with them a few months back) but harmonise wonderfully a la Thin Lizzy. The lead breaks absolutely shred and Tom Harte’s vocals have never sounded better. He may not technically be the best singer in the world, but you can’t imagine anyone singing these songs and sounding as good.

Paragraph about my favourite songs. I could simply post the track listing at the end of the review. Those are my favourite songs. Yep. All of them. It is not a cop out. Each time I listen to the album with the specific intention of finally picking those one or two standout tracks, I fail. All that happens is that I listen to the album all the way through and then it repeats, and I am no further forward. This is an album in the classic, almost forgotten sense, not some random collection of songs to be cherry-picked over.

If I have any belated criticism at all of past T.D. albums it was that they almost tried to do too much, like being two or three different bands within an album. It wasn’t done cynically, it just happens when a band has differing songs they want to include. ‘Fighting For Everything’ is not like that. Somehow, T.D. have managed to cover all the major song types – rabble rousing, punch the air rockers; melodic, more radio friendly, songs; window’s down driving songs; and finally, a beautiful, but muscular, ballad. They have these types of songs in all their albums but somehow on ‘Fight…..’ they have done it in a much more natural, consistent manner – with little deviation from the core, let’s call it, ‘Big Truck’ sound. To be this heavy and this melodic at the same time is frankly, genius. Metallica tried it in their Bob Rock-produced era, but it wasn’t natural and Hetfield’s vocals, strong though they are, haven’t any Blues in them. Harte does have blues in his vocals, and that is why these songs convince more.

And that’s the simple truth behind ‘Fighting…’ for me. Trucker Diablo have hit the right formula for them. It is a formula that channels that Bob Rock-era ‘Tallica with classic Thin Lizzy. Sounds easy? Well, you only have to listen to Metallica’s horrible cover of ‘Whisky in the Jar’ to know how you can have all the ingredients but if the chef can’t cook…

This album is perfect, right down to the running order, and wasn’t that how all your favourite albums felt when you listened to them in your bedrooms that first time, second time…thousandth time? That skipping one song just wasn’t right (even ‘Love Hungry Man’ from ‘Highway to Hell’)? Were this album released during those decades where Rock dominated the charts, Trucker Diablo would be a household name across the world. Heck, even now, if Dave Grohl was somehow involved in this album it would be a global success. That’s the only worry for me, that an album this good could possibly not get the reward it so richly deserves. Hopefully, the band can secure a good distribution deal so it gets to where it needs to, in peoples’ hands, in their cars, in their CD collections.

Trucker officially launch the album this Saturday, 14th October at Bar Sub Q.U.B. If they play ‘Fighting For Everything’ from start to finish, you would not be disappointed. In fact, I hope they do. I’ll be there.